by Lightfoot
When it comes to epic journeys, the wildebeest migration from Tanzania to Kenya is hard to beat, says Stuart Butler
The lead animal was twitching and snorting, his hooves kicking up the dust. He seemed uncertain. Crouching forward ready to jump and then easing up again and backing away. For a half hour this went on. Poised and ready, nervous and dithering… You could almost feel the indecision in the air. And then, perhaps encouraged by those waiting behind him or perhaps pushed. He jumped. The impact of his splayed legs hitting the water seemed to flick a switch and suddenly they all came. At first they jumped by the dozen, but within seconds it seemed that hundreds of wildebeest were pouring down the river bank and the air was thick with dust and the bleating of terror. The churning waters swept many downstream to their doom and then, as the waters turned thick with mammalian blood, the crocodiles seemed to rise from nowhere and strike.

I was on the northern banks of the Mara River on the Kenya-Tanzania border watching the first big herds of wildebeest risk it all to cross from Tanzania’s now dry and parched Serengeti National Park to the lush, rain-fed grasses of Kenya’s Masai Mara National Reserve. 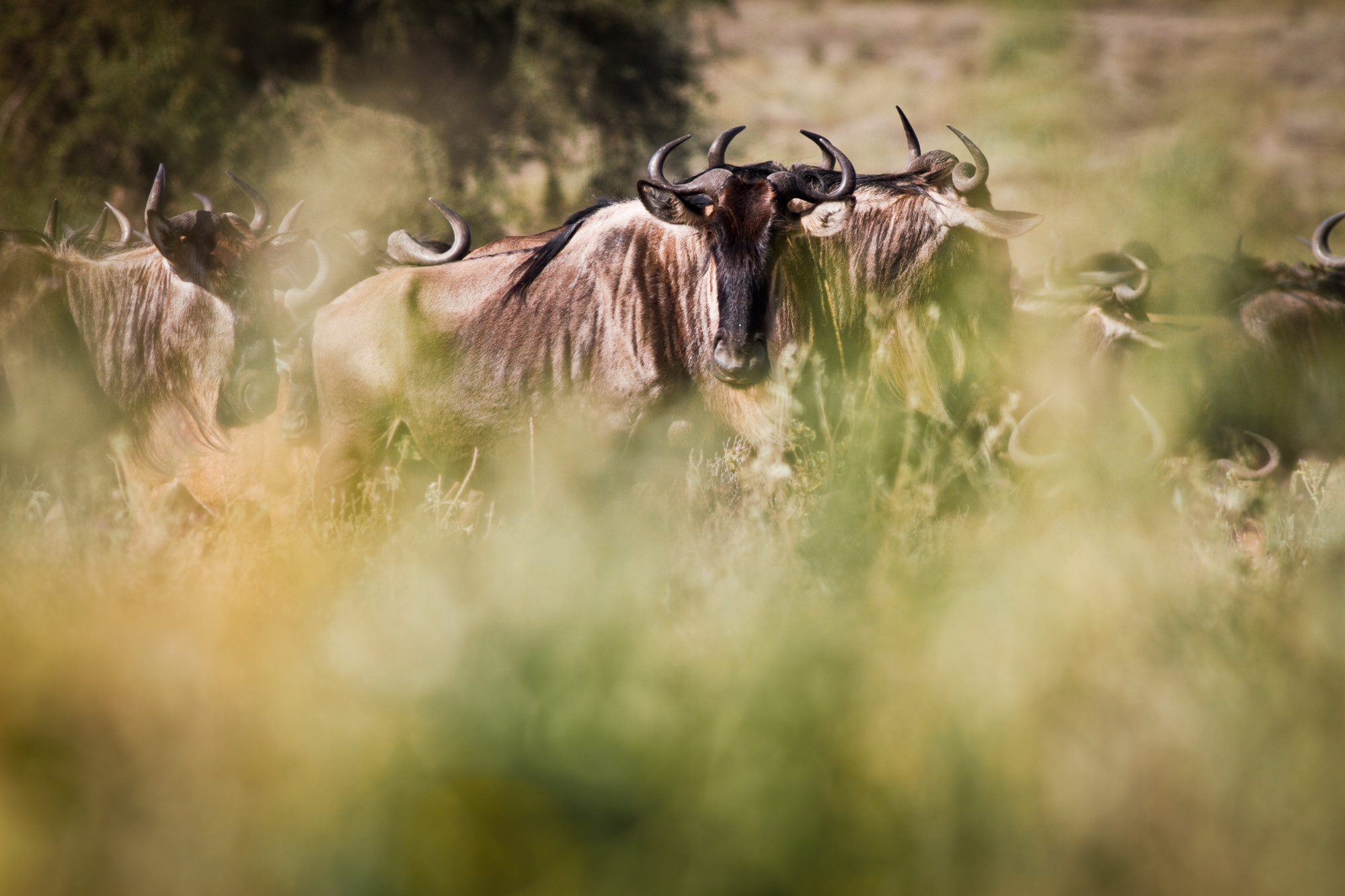 Thanks to countless wildlife documentaries East Africa’s migration of the wildebeest has come to be considered one of the great spectacles of the natural world. Few who have watched the wildebeest launch themselves into the Mara River would disagree. But there’s so much more to the migration than those few dramatic, and often deadly, moments in the angry river. And while this show has been happening for centuries, not everyone is aware of how the greatest show on earth works. People often talk of Tanzania’s Serengeti and Kenya’s Masai Mara as if they were different, unconnected places, but they are in fact part of a single eco-system. Not just that but the areas surrounding, and in the case of Tanzania in particular, extending quite some way outside of these two protected areas, are also a part of the same, greater Serengeti eco-system.

Today the area is known as the home of the safari and in a few short days a visitor here can expect to be overwhelmed with sightings of tawny-coloured lions lazing under bushes, cheetah streaking over the grass plains, elephants plodding under a setting sun and hyenas cackling in the night. But it’s the opportunity to see the life and death drama of the wildebeest migration that is for many the real reason to visit. And, for many people, the wildebeest migration essentially means watching the masses crossing the Mara River. But this river crossing, which occurs only at very specific times in around June-July and September-October (it’s all rain dependent), is part of a year round circular movement that encompasses the entire Serengeti eco-system.

The cycle begins in about January-February on the short grass plains in the far southeastern corner of the Serengeti. It’s here, over the space of a couple of weeks, that the wildebeest give birth. If you can’t be witness to the river crossings then this is the next best thing. All those wobbly-on-the-feet new born wildebeest provide easy pickings for the large numbers of big cats that live in this area. Slowly, as the rains fall and new grass starts sprouting further north the wildebeest start moving. The exact route they take can’t be predicted, but they rarely travel as one single mass and instead break down into different herds (which can be many thousands strong) that move through different areas of the Serengeti. Five months or so after giving birth they cross the Mara River into Kenya where they spend three or four months before the rains start in the southern Serengeti and they begin the long hazardous journey back to the birthing grounds where the cycle begins anew.

We tend to think of the migration as timeless and unchanging, but the truth is far more complicated. Perhaps one of the starkest examples of this was made clear to me by Kenneth Maroro, a guide with the safari company Asilia Africa. We’d set out towards the aptly named ‘Hidden Valley’ in the south-eastern corner of the Serengeti just as the dawn light had started to tinge the eastern horizon pink. Along the way we’d found a pack of lions crunching through the last meat and muscle of the previous night’s wildebeest encounter, then we’d driven through a herd of wildebeest and zebra that stretched as far as we could see in any direction before finally reaching the still ponds and lakes of the Hidden Valley. Egyptian geese, tubby and brown, watched as Kenneth and I took a seat on the bonnet of the jeep and looked out towards the wildebeest that started to arrive in a python-like line to drink at one of the small lakes. 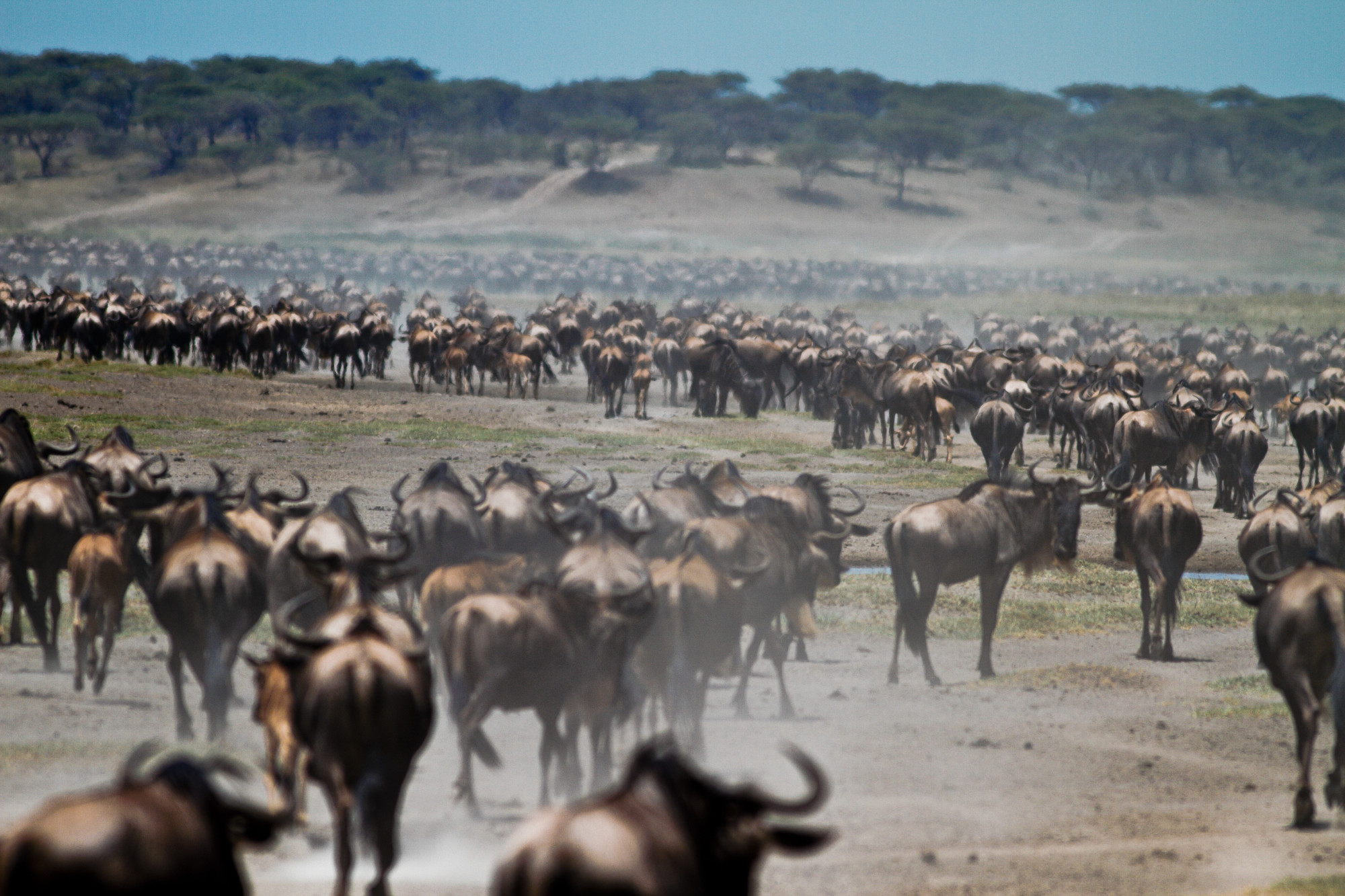 As we watched I made a throw away comment about how impressive the migration must have been a hundred years ago before man had worked his worst on the wildlife of East Africa. But Kenneth surprised me by saying: “Oh no. Today you’re seeing it at its best. Over the last 50 years the number of wildebeest in the Serengeti has grown enormously”. He went on to explain how, in the late 1800s, a serious outbreak of rinderpest, an infectious viral disease of cattle and other ungulates had swept across the continent and wiped out an estimated 95 per cent of the cattle in Africa as well as huge numbers of other vulnerable wildlife, including the Serengeti wildebeest. By the 1930s there were probably only around 100,000 wildebeest left in the Serengeti. It wasn’t until scientists managed to wipe rinderpest out in the 1960s that wildebeest numbers started to climb and they climbed fast. “Within 20 years of the scientists getting rid of rinderpest”, Kenneth continued, “the population of wildebeest had risen to around 1.4 million and it’s basically remained at that level ever since”.

Even so, despite the huge number of animals involved actually finding the wildebeest can at times be tricky. And this is one of the key things to remember when chasing the migration. Nature can’t be predicted. I’ve frequently driven through grasslands looking rich and ready one day, yet seen nothing more than a handful of zebra and topi. But 24-hours later that same green grass can be hidden under the hooves of 10,000 or more wildebeest. At times they can form a near solid black mass, heads down chewing and nibbling, stretching way off into the heat haze. A day later though and again the plain can be virtually empty with the knee high grass of a few hours earlier mowed down to its base and no other living creature visible save a few dung beetles tidying up the mess left by the passing wildebeest festival.