I was standing on a narrow ledge halfway up a sheer precipice. Below me was a 1,000 foot drop to the valley floor. Somewhere above me, at the top of a precipitous cliff, was the church of Abuna Yemata Guh. My legs felt like jelly.

The priest was holding my hand. ‘You must try,’ he whispered. ‘God is watching.’

There are moments when Ethiopia seems to belong to an atlas of the imagination – part legend, part fairy tale, part Old Testament book. Its isolation is legendary, the only African country never colonised by Europeans. For long medieval centuries Europeans believed that Ethiopia was home to Prester John, legendary Christian ruler, descendant of one of the Three Magi, keeper of the Fountain of Youth, protector of the Holy Grail, and all round good guy who would one day rescue the Holy Land from the Muslims.  For modern visitors, this land of wonders offers fabulous medieval castles, monasteries among Middle Earth peaks accessible only by rope and chains, priests who wear white robes and tote shepherd crooks making them look as if they have just stepped out of a Biblical painting, and some of the most stunning landscapes in Africa.

I had come to walk in Tigray, a wonderful highland region of sleepy villages and friendly unhurried people. It may be a little short on stylish boutique hotels, but it is huge on a sense of adventure and a warm welcome. 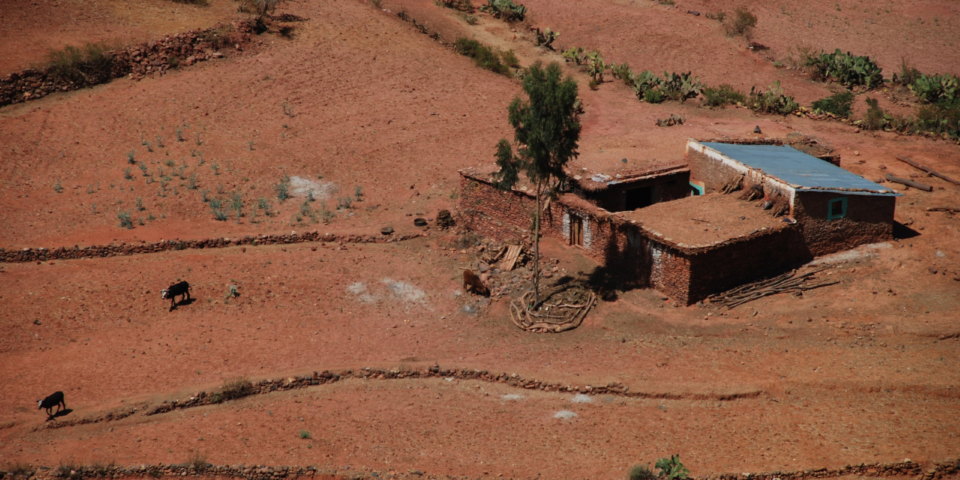 I HAD COME TO WALK IN TIGRAY, A WONDERFUL HIGHLAND REGION OF SLEEPY VILLAGES AND FRIENDLY UNHURRIED PEOPLE

With my bag loaded onto a donkey, I set off with a guide and two porters down the dust lanes of the Erar Valley on a three-day trek. I strolled underneath the latticed shade of eucalyptus trees, past scented banks of sage and mint, and between stands of prickly pear and neatly ploughed fields, framed by irrigation channels. I rested beneath the shade of vast fig trees that were home to colonies of hornbills, bee-eaters, and fire-finches.

Men were winnowing wheat by hand while children played in the orchards with home-made toys – a ball of goatskin and twine or a doll of twigs and wool. In the late morning I passed people coming back from the weekly market two hours walk away. They were carrying some of life’s essentials – new sickles, bags of rice, bolts of bright cloth, blocks of salt that had come up from the Danakil deserts by camel caravan. Everyone stopped to greet me with handshakes and smiles.

The trek was part of a community project. The guides and the transport – my faithful donkey – are provided by local villagers who have also built, with the help of NGOs, hedamos or guest houses. I was to learn that there is something very special about these Tigrayan guest houses – their locations. 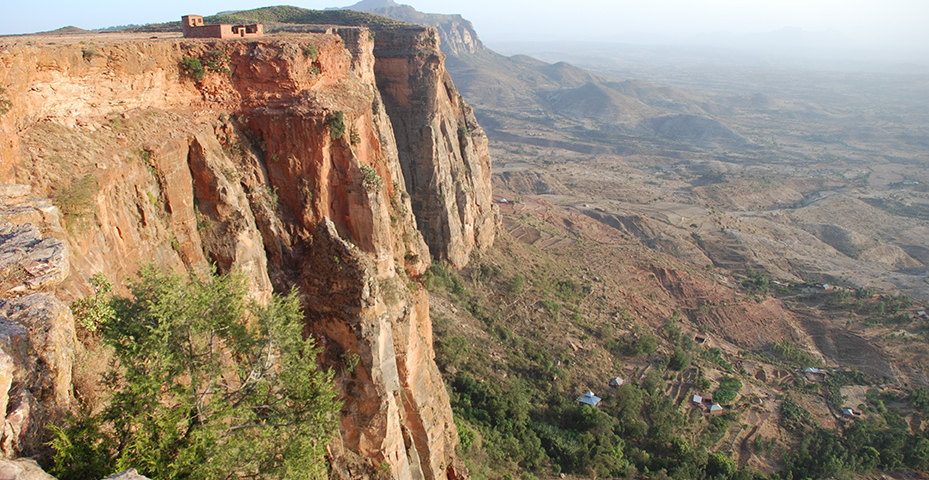 Tigray is a mountainous region of staggering melodrama characterised by vast mesas or ambas: dramatic, sheer-sided, flat-topped mountains. Though most of the treks are easy-going, following the valley floors through pastoral landscapes, towards the end of each day, we started to climb, following steep paths along narrow rising ledges, to the summits of these anvil-headed ambas.

On the top we emerged in a whole new world of luminous light and distant views. Here we found our home for the night, a community hedamos, perched in splendid isolation on the lip of colossal escarpments, as much as 3,000 feet above the landscapes below.  The views were breath-taking. We looked straight down, past circling eagles, to the world we had just left – ploughed fields, stone tukals, eddying sheep, tiny white-robed figures trailing along dust lanes. In the distance, mountains patrolled the horizons. With a slight turn of the head, I took in hundreds of miles.

At Erar and Shimbrety, the stone-built guest houses with their little courtyards and roof terraces were comfortable but basic. Village women arrived to make delicious Ethiopian dinners. The toilets, western-style, were spartan huts. Washing facilities were wooden buckets of warm water. There was no electricity, just lanterns and candles.

Yet these felt like the most luxurious places I had ever stayed. It was the luxury of unique experience, of meeting local villagers on their own grounds, of engaging with an ancient way of life, of being far from tourism’s well-trodden trails. 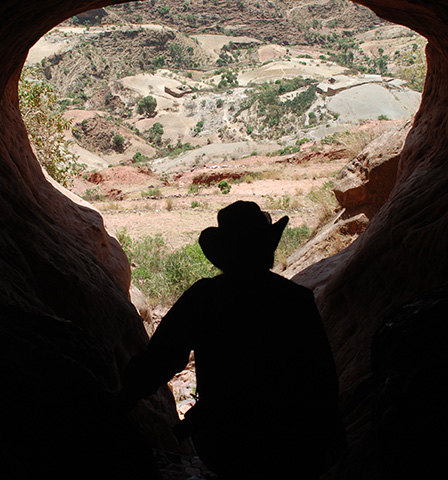 At Erar, night came with equatorial suddenness. A troop of gelada baboons, 30 or so strong, made their way home across the amba summit after a day’s feeding. They climbed down over the edge of the escarpment to precipitous ledges where they would be safe from leopards. As the sun set I turned round to see a fat full moon rising directly behind me. The world seemed to be in perfect balance.

Scattered across the mountains of Tigray are over 120 ancient churches, most excavated in remote rock faces like caves. Older than the churches at Lalibela, Ethiopia’s most famous destination, they were virtually unknown to the outside world until the 1960s.

Abuna Yemata Guh is one of the more challenging to reach. I was getting a crick in my neck gazing up at the sheer cliff that was the only access. The priest advised me to remove my shoes and socks; apparently bare feet would give me a better grip. Two men had arrived, climbing assistants, whose job was to try to prevent me from plummeting to my death.

They proved invaluable. Spread-eagled on the cliff face, clinging to its minor indentations, they guided me to the crucial foot and hand holds. Slowly, carefully, nervously, and remembering never to look down, I made it to the top. A final narrow ledge brought me to a wooden door set into the rock face. The priest wrestled with a key the size of a cricket bat. The door opened and I stepped into the gloom of the tiny church, hardly larger than a modest drawing room.

As my eyes adjusted, I became aware of faces round the walls. Then the priest lit a torch and held it aloft. Suddenly the dark walls were alive with figures. The priest introduced me to them. He referred to the apostles as if they were old friends. He showed me the Nine Saints, who had brought Christianity to Ethiopia in the 5th century, as if they had known his grandparents. He spoke of Abu Yemata, the builder of this church, and here mounted on a white horse, as if he was a neighbour.

I asked why the church was here, so difficult of access, so high in these cliffs. The priest said it was for reasons of safety – it may well have been built when Christianity was still vulnerable to persecution. Then he added, ‘We are closer to God here, away from our world, and closer to his.’

He lifted an ancient text wrapped in an ox-hide satchel from a nail on the wall. He asked if he should say a few prayers. I said I thought it might be a good idea. After all, I still had to get back down that cliff-face.