TREKKING WITH ELEPHANTS IN LAOS

by Lightfoot
Claire Turrell takes a walk on the wild side in Luang Prabang
My guides were slow and unhurried. I took care not to trip up in their rather large footprints that formed potholes in the red clay tracks. We wandered between the teak and bamboo trees, occasionally stopping for them to grasp succulent shoots to quash their rather large appetite on this mini expedition. The only noise to be heard was the groan of dead tree branches underneath their feet, or the crack of another bamboo shoot being plucked from the ground.
Ahead was more jungle, but my pachyderm guides navigated their way between the tree trunks and up eroded muddy paths with ease. For over the past 30 years this forest in Laos had been their home. It was once where they worked for a logging company, trekking through the forest carrying teak branches. Now they have now left their life of hardship behind and have permanently been put out to pasture. Their only role from now on is to act as guides for visitors to their home of Luang Prabang in Laos.

My introduction to my pachyderm guides happened earlier in the day when they crossed the river to greet me. Walking down the hillside and stepping into the clear water of the Mekong tributary, they appeared to relish their new role. The two Asian elephants that would join me on my trek through the jungle were part of a herd of seven pachyderms aged between four and 60 that had now made their home on the Nam Kham river. 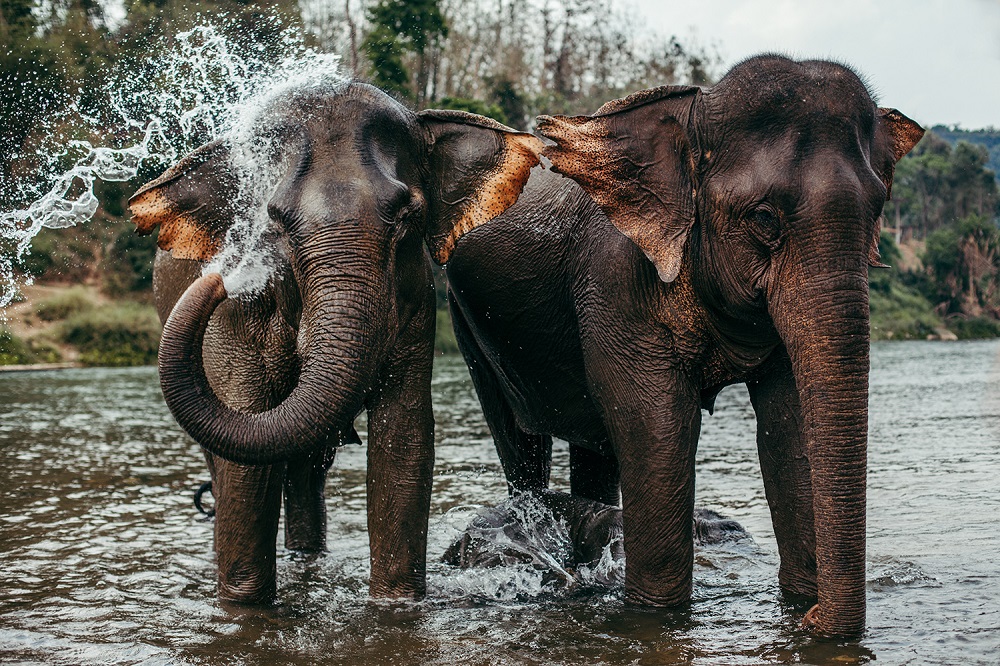 With legs slightly shorter than the elephants’, I took a banana boat ride across the river to meet them. The best way to anyone’s heart is through food, so the team had given me a basket of bananas to feed my guides. They waited patiently as their latest mahout came to join them. Before I set off I had been given a lesson in commands, including ‘stop’, ‘go’, ‘turn right’ and ‘turn left’. There would be no riding here, it was more a case of avoiding elephant feet on human toes. And as an elephant gently leaning his trunk against you, can almost push you into the bushes, I decided to forget left and right and focus on ‘How!’ [Stop in elephant language].

Not as surefooted as my guides, I stumbled out of the boat and across the pebble shoreline with my 15kg booty of lady finger bananas. Waiting patiently for me on the shoreline, they watched as I snapped each individual banana away from the bunch and fed it one by one to them into their outstretched trunks. They were surprisingly tender. I would hold each one flat in my palm and they would gently wrap the tip of their trunk around it before whisking it off into their mouth. Even when I dropped one or two whilst trying to balance my camera, they remained patient and they would gently send their trunks snuffling along the floor until they’d found their prize. I just had time to crack the next banana from the bunch before a hairy, moist trunk appeared in front of me again.

With two animals each the size of a minibus it wasn’t long before we hit the bottom of my basket of wares. So my next role as a burgeoning mahout was to give them a bath in the river. The mahouts showed us how we needed to plunge a bucket into the water and create a pop-up outdoor shower by hurling it across the elephants’ backs. The pachyderms seemed to enjoy the pampering as they played in the water. After cooling down in the river, the elephant guides were ready to take us for a trek through the jungle.

We left the river behind to walk slowly down a muddy track between two farmer’s fields, while the elephants then took a short cut down the river and we walked alongside them down the bank. While China’s new belt and road initiative was carving its way through the mountains in the North of Laos, in preparation for a new high speed rail link, this forest in Laos remained untouched and was home to Hmong villagers and now seven elephants. 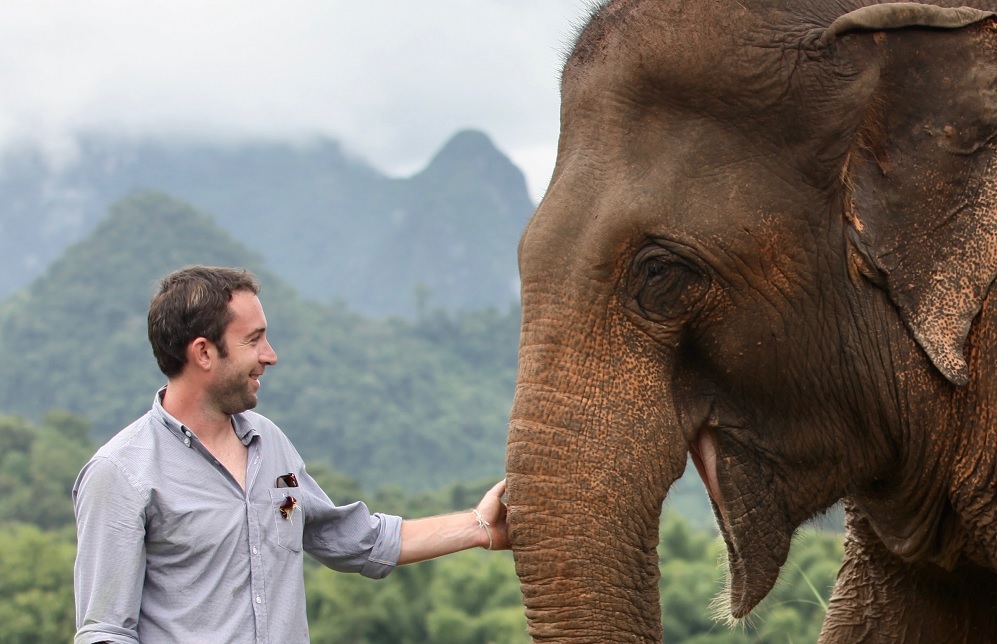 Leaving the riverbank behind, we took a narrow trail through a purple flower strewn meadow that was peppered with a handful of buffalo lazily chopping on the grass. They raised their heads to look at the tourists, but didn’t even flinch as the giant pachyderms wandered past.

As we made our way up the steep hillside to the elephants’ jungle home, we faltered in our rubber soled boots that we’d been given to wear in the water, while the elephants just slowly pulled their giant heft up the hillside without a care in the world. When we stopped at the top of the hillside to take in our surroundings and snap a few photographs, our guides also wanted to join in the fun. Lining myself up for a selfie it felt like a warm tree trunk had pushed against my shoulder and it was in fact one of the elephants working his way into the shot. When you feel the might of such a creature in such close proximity, you quickly understand where you come in nature’s pecking order

We then left the elephants to wander in the jungle while we returned to reserve across the water. At the moment the newly-built sanctuary looks after just two elephants, but their plan is to raise funds to lease more. They don’t have the funds to buy the elephants, but with the help of the money from visitors they can lease them and offer these majestic creatures a new way of life and visitors in turn will be treated to a magical way to view the jungle.

BABY ANIMALS IN THE WILD