Train Ride Through Uzbekistan | Best of Uzbekistan I Lightfoot Travel

Distracted by the beautiful chaos of the Kazakh station, little did my friend and I realise we were about to miss our train to Uzbekistan. We were transfixed by the sight of camels on the platform jostling with traders carrying baskets of fruit and passengers hanging out from the windows of their waiting trains.

The passengers were waiting, it turned out, for us. Luckily we were identifiable: two European women wheeling bicycles piled high with luggage was an unusual sight in this corner of Kazakhstan. Soon every free hand in the village of Aktau was helping us haul our luggage up the steep steps to door of our first train, to the desert town of Nukus, Uzbekistan.

In our home city of London, holding up the train would have aroused the annoyance of other passengers - but not here. Instead Uzbek families crowded onto wooden bunks greeted us with shy smiles as we walked the length of the carriage to find our beds. By the time I hauled myself into my bunk I had been gifted a cup of hot tea and a paper napkin stuffed full of sweets. 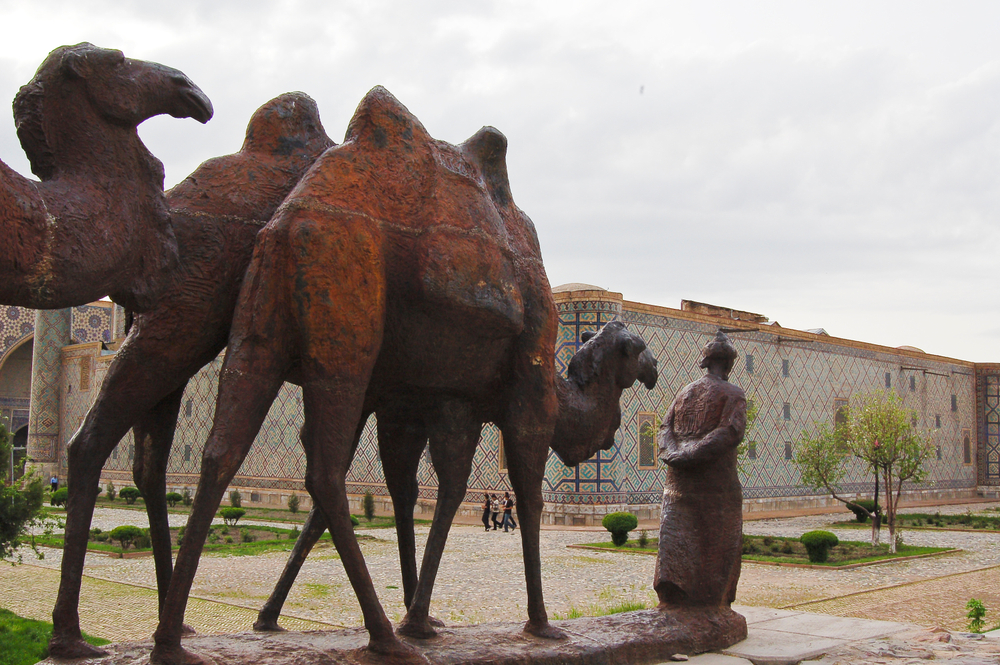 We crossed the border into Uzbekistan at 3am. The train was eerily silent as we pulled into no-man’s-land. After the border guards examined our passports, the train groaned to life, and we rolled quietly into one of the most mysterious countries in the world

Dawn broke over the desert and I watched the sun rise over the sand dunes from my bunk. We arrived in Nukus mid-morning and wheeled our bicycles through the glistening station, decorated in turquoise and blue mosaics. Uzbekistan sits on the Silk Road, the ancient trade route between Turkey and China, and in the past travellers would have alternated nights in caravanserai (roadside inns) and yurts; spacious, round tents with open ceilings. As it was our first night in Uzbekistan we decided to try out a yurt; and the one we hired was sumptuous, decorated with jewel-coloured tapestries and silks.

Under a blanket of stars we enjoyed bowls of thick laghman noodles served in rich goat meat gravy, then we fell asleep to the sound of the desert wind as it whistled around our tent.

The next day we walked around the corner to one of the most famous art galleries in the world, the Savitsky Collection. Certainly it is one of the most incongruous: the chic modern building, out of place in this little desert town, is home to the second largest collection of Russian avant-garde art in the world, much of it rescued from destruction under the Soviet Union. Nukus was a “closed city” until 1991, when Uzbekistan gained independence, and it was only then that the outside world realised what a precious resource was hidden in this far-flung frontier town. Standout pieces include Lev Galperin’s avant-garde painting “On His Knees”, depicting a man swooning in a kaleidoscope of muted earth tones, and the vibrant Cubist paintings of Alexander Volkov. 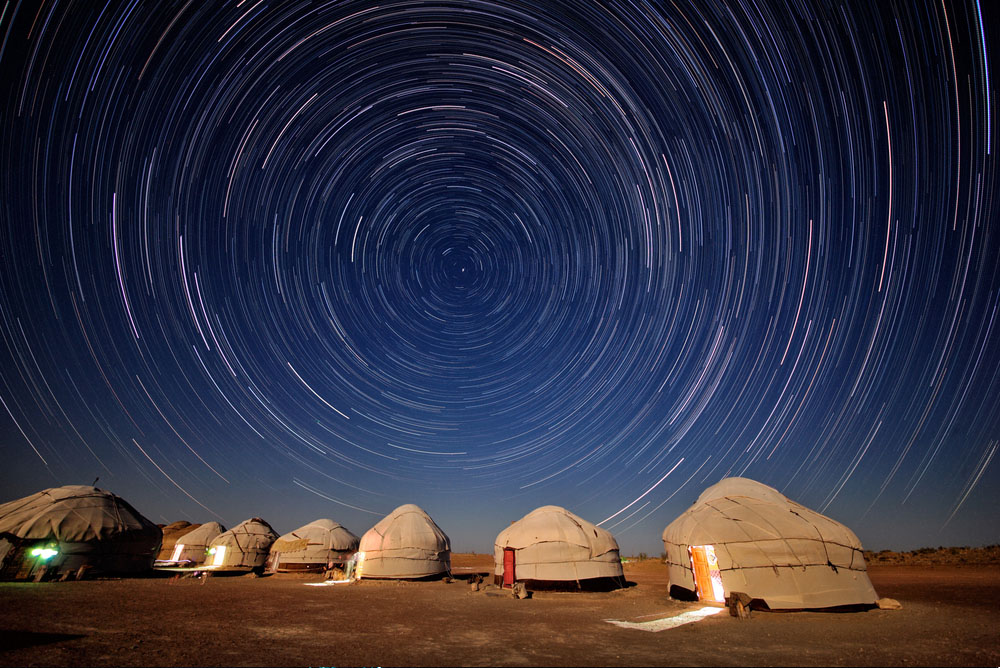 The next morning we caught the train from Nukus to Samarkand. Our train had started its long journey in Moscow and the dining car was the itinerant community’s beating heart. An elderly woman offered us a bicycle-wheel sized disk of bread, then an elderly man proferred a teacup filled with a strong smelling spirit. I took a sip, and he winked at me: “Vodka!” When we weren't being fed bread or vodka, the chef arrived with plate after plate of Russian and Central Asian food: thick vegetable stews, sharp, pickled salads.

Twenty-four hours later we reached Samarkand, jewel of Central Asia. It felt strange to arrive in one of the most romantic cities in the world by train - it would have been more appropriate to arrive by camel, or magic carpet - but we missed the plush train's air conditioning when we stepped out into the scorching heat of the central desert. We rode our bikes through the commercial district to the old city, past the breathtaking, mosaic walls of the Registan. Registan, which is the ancient heart of the city, comprises a cluster of 15th and 16th-century buildings set around a central courtyard that were built as madrasas (Muslim schools). Our hotel was just around the corner, so we parked our bicycles and walked through its cool courtyards as the sun was setting. 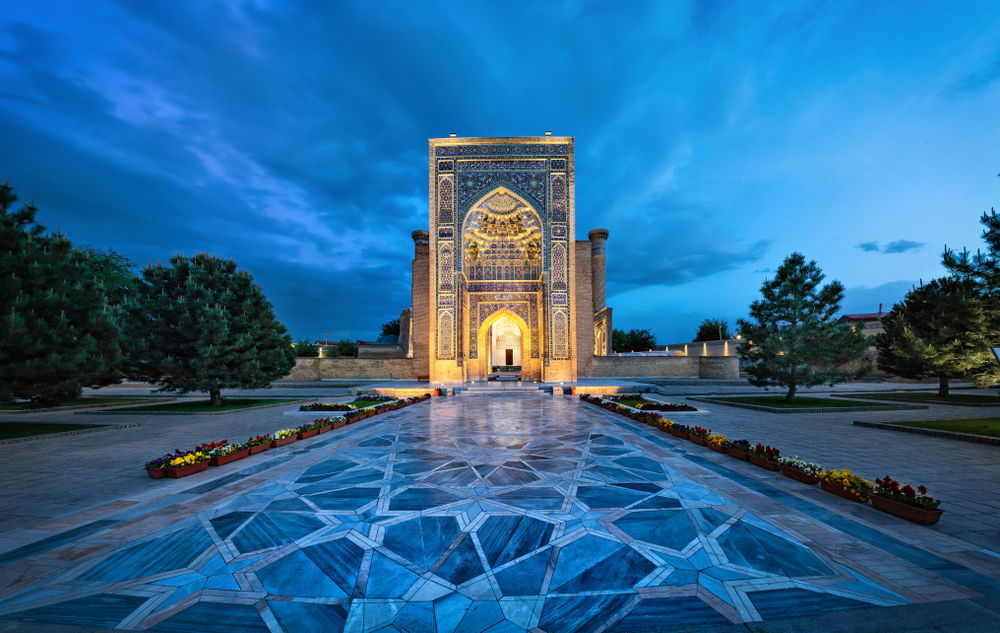 The next day we lounged across the daybeds of our hotel, drinking green tea and eating fresh fruit. Before the sun climbed too high into the sky, we walked to Gur-e-Amir, the mausoleum for the ancient Uzbek warlord, Timur. Built at the end of the 14th century, this building is famed for how it is so simply constructed.

Timur's tomb is said to bear the inscription "whoever once opens this tomb will be defeated by an enemy more fearsome than I". However, this didn't stop a Russian anthropologist from deciding to open it in 1941. Apparently, the Gur-e-Amir guides will often state that the day after he opened it, Hitler attacked the Soviet Union.

We rode our bicycles back to Samarkand station the next day, reluctant to catch our train to the edge of Uzbekistan, where it bordered Tajikistan at the feet of the Pamir Mountains. I hauled myself along my narrow bunk to the window and lay my soft pillow against it, watching as the minarets and towers of Samarkand melted into the night. We woke up the next day in Denau, a bustling market town, and had coffee in the beautiful cafe beside its station.

Out of the desert now, the roads were overgrown with trees rich with birdsong. We cycled slowly away from the station towards the border with Tajikistan, and noon found us taking a break in a little shack in a watermelon field. A curious face peered around its corner; then two, then three. A school, just let out of class, had come to investigate. As their confidence grew they tried on our helmets, rang the bells on our bicycles, took selfies with our phones. We left Uzbekistan as we had entered it; surrounded by new friends.

THE JOURNEY TO CREATE A YOUNG ADVENTURER

National Geographic Traveler of the Year Shannon O’Donnell reveals how a trip to Southeast Asia helped her niece blos...

Need a little alone time? Then book one of these glamorous breaks 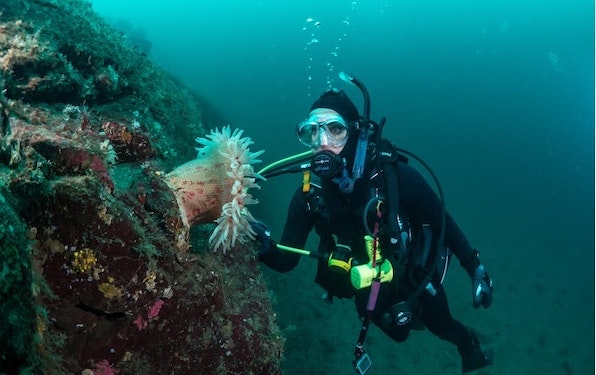 Eco-adventurer Cat Capon suggests the best places for solo female travellers who are looking for adventure.