by Lightfoot
Nat Geo photographer Steve McCurry, the man behind the world’s most famous photograph, chooses five of his favourite shots from his career. He tells us why each shot is so special…

The award-winning photographer Steve McCurry has proved time and time again that there’s nothing he won’t do to get the perfect shot, including sewing rolls of film into his clothes when escaping from an Afghan war zone. He has covered numerous conflicts and his work has regularly been seen in National Geographic magazine. And it was his June 1985 cover shot for National Geographic that caught the world’s imagination. His portrait the ‘Afghan Girl‘, was named the most recognised photograph in the history of the magazine. From the thousands of photographs that McCurry has taken throughout his career we asked him to tell us more about some of his favourite images.

“One picture that I am really fond of is the image I took in a dust storm in India. I was driving down a road in Rajasthan and it was about 110 degrees, when a dust storm whipped up suddenly. Through a big cloud of dust, I could see these women huddled together, singing a prayer for rain. I didn’t want to get out of the car at first because I was concerned that my cameras would be damaged by the dust, but then I realized you can always replace your camera or your lenses, but that moment was a fleeting thing. So I got out and shot a roll of film, and it was magical. After only moments, the storm disappeared and it was as if nothing had happened.”

“Seeing nuns walking through the streets of Rangoon is a very common sight. But this particular morning, it happened to be raining when I ran into a group of nuns walking silently in a single-file procession. They were collecting their daily ration of food from the community with their colourful umbrellas up. Even with the vibrant colours, the moment was very serene and still.”

“One very hot day I saw these women picking clover in a field. It must have been around 35°C and they were completely covered from head to toe. I still haven’t found out why their hats are that shape – maybe it’s where they keep their lunch! That’s what I love most about travelling; seeing different people and different ways of doing things. I think it’s a shame that, due to growing globalization, gradually the world’s wonderful cultural differences are being lost. These days everyone just wants to wear the same baseball cap.”

“I took this image on a visit to Bombay during Ganesh Chaturthi. I was looking for opportunities when I came across this boy drenched in red powder. He and his friends threw the powder all over me as soon as they saw me. After a few pictures he got really serious. It was a brief encounter, but maybe he felt this was something important. The intensity of his expression is extraordinary. I think the simplicity creates this timeless quality. It is far more important to just be in the moment, to be aware of your surroundings, and to be prepared to seize the moment when it presents itself.” 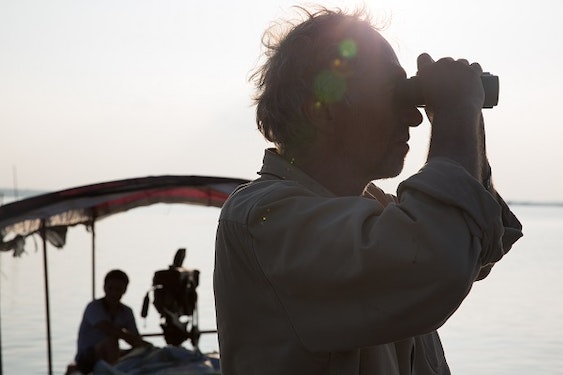 TRAVELLING THE YANGTZE WITH A NAT GEO PHOTOGRAPHER

Nat Geo photographer and legendary film maker Eric Valley trekked along the river valley to see what stories he could...