SCIENCE HELPS SAVE THE RHINO IN AFRICA

When the Full Moon hits, the rhinos are at the most risk. This beaming torch in the sky that lights up the wilderness at the beginning of each month helps poachers skulk around the park and do their dirty work. On darker nights the artificial light from their torches usually give them away, but when the Full Moon is in the sky, the poachers can track and shoot rhino without having to rely on torches to aid them.

The rhino are prehistoric behemoths that are incredibly tolerant and trusting, and while they can be aggressive when required, it’s our job to help save these very impressive animals.

There are now around 19,000 white rhino and 2,000 black rhino in South Africa. Over the past 20 years the number has been able to grow at around six per cent due to conservation, but the chances of increasing these numbers even further are constantly being wiped out as poaching is growing at an exponential rate too.

The multi-layered process needed to help save the rhino is as complicated and challenging as the landscape the animals call their home. Not only do you have to try and encourage the governments to change the laws; use national security and local networks to help give you an overall picture of what’s happening; but you also need to call upon the help of the local community to provide a security blanket that stops the poachers from being able to cross the reserve and get to the rhino. The next level of protection created to protect these animals is provided by our “boots on the ground’. These are well-equipped, trained staff who conduct patrols either by air, 4×4 vehicle, motorbike or on foot, in strategic areas and at observation posts.

But now all of these elements have been backed by yet another support network – science. With the help of state-of-the-art technology we have been able to help cause even more problems for the poachers – and even more extraordinarily the end receiver of the ivory.

To help protect the rhino we need to know where they are at all times. We started by ear notching, which helps us identify the animal, understand the local rhino population and the dynamics of who is related to whom. Rangers need to be able to understand the rhinos’ territories and what their feeding and shelter requirements are.

But now science has taken rhino protection to another level, we are now using satellites to help protect the animals. Until recently we used radio transmitters to track the rhino. However, it was much more labour intensive and you needed to get within a certain range before you were able to track the animal. Now designer Martin Haupt from African Wildlife Tracking has created a new tracking device that enables us to use satellite technology to find each animal instantly. 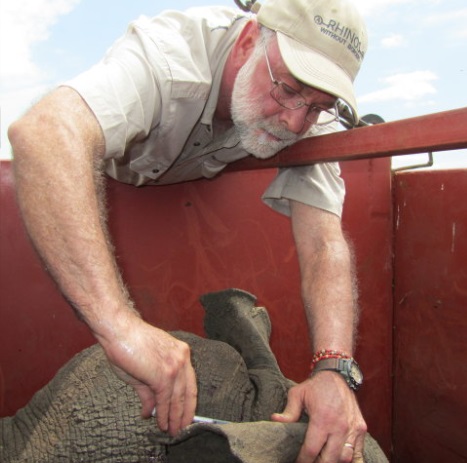 We fitted the latest transmitter technology to a crash of rhinos that we recently translocated to Botswana as part of the Rhino Without Borders initiative. Currently the political support and government commitment in Botswana is exemplary and they currently provide the best option outside of South Africa for securing wild, free ranging, breeding populations of both black and white rhino.

The tracking system was fitted while the animals were in quarantine. Each animal was immobilised with a remote dart, and then once it was manageable, the team drilled a small hole in its horn and inserted the transmitter. Within 30 minutes the vet was able to insert the tracker and its battery and fill with dental acrylic. To the untrained eye the rhino’s new transmitters are invisible, and the rhino is able to leave none the worse for wear.

This means that in some reserves we can now see when a rhino stops moving, know if the horns have been separated from the animals and track the horns. And seeing as the horns are now recorded on a DNA database, we can now tell which reserve the horn came from when Customs and Excise officers seize it in China.

I’m much, more angry with the middle men and traders than the poachers. The poachers often have no alternative to survive, it’s the drug cartels and mafia style organisations that run the poaching that are the real enemy, I would do more than notch them if  got my hands on them.

While there is no silver bullet to this rhino poaching epidemic, this project is a very important strategy to help protect the animals. It’s great to know that rhino monitors, who are tasked with this job, now have another tool to use besides their eyes and ears to track these magnificent animals.