by Lightfoot
Richard Waters and his son Finn, rolled up their sleeves and tried their hands at one of the world’s most traditional farming methods

My teenage son is not happy with me. “When do I get the iPhone back?” he says tersely, as we rattled along in a tuk-tuk past Luang Prabang’s morning throng of hawkers, monks and travellers. Leaving the World Heritage, UNESCO-protected city behind us, we pass water buffalo grazing at roadside, golden wats (Buddhist temples) and as well as a few elephants and their mahouts wandering alongside the Mekong River. So far in Laos we’ve zip-lined through the jungle, explored a creepy five-mile cave by boat, and ridden on the neck of an elephant (the only kind way to do so)  and Finn’s loved them all. I wonder if experiencing half a day in the shoes (or rather bare-feet) of a rice farmer will qualify as sufficiently interesting for him to ditch What’s App and Instagram?

The Living Land is a cooperative of seven families, which produces organically-grown vegetables for Luang Prabang’s finest restaurants, and educates Lao people to abandon ‘slash and burn’ farming and the indiscriminate use of pesticides and chemical fertilisers – both of which leave the soil un-farmable, in favour of land-friendly methods. Fortunately, they also teach falang (foreigners) how to grow rice, and while their profits are ploughed back into the local community building better schools, this noble cause is also enriching for the visitors; even for an impatient 13-year-old and his weary 45-year-old father.

Eight of us gather early in the morning in a stilted wooden house, that’s surrounded by emerald-coloured rice padi fields. Half of our merry band are children, the youngest of which is about five-years old. It’s September and the late monsoonal weather can be unpredictable, so the first thing our friendly English-speaking guide, Sia does is dish out bamboo coolie hats for us to protect ourselves from the sun or (more likely) rain.

“Sticky rice is sacred to the Lao,” he explains, “It’s our national dish but also much more than that. We make offerings with it to the spirits of trees, to bless buildings… at weddings and funerals, and before we take long journeys. Rice is Laos.” 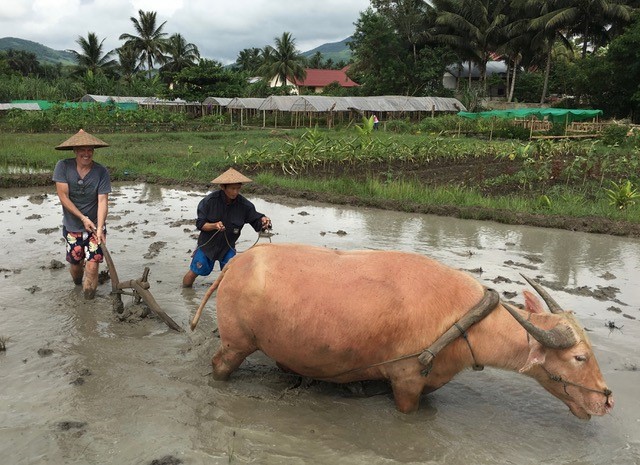 Just as Finn’s fingers start twitching for the iPhone rudely stolen from him, sprightly Sia, who’s a natural with kids, gets us on our feet and shepherds us outside. “There are 14 stages of growing sticky rice,” he says, “and the first six are the messy ones. Stage one, we must choose the right grains otherwise we’ll have a poor harvest.” He drops a handful of rice grains into a bowl of water, and like the medieval witch-hunters of old, the rule is that if the grains float, they’re good to plant.

Around 500 different grains of ‘sticky rice’ are grown in Laos. It is taken as a snack, and an accompaniment to breakfast, lunch and dinner. What’s magical to me is the fact that the tools and techniques used in its preparation have little changed over the centuries. Although, the fast approaching modern Chinese rail link that will run from Kunming through Luang Prabang to Thailand could change that.

Sia passes around some sample seedlings which have grown in just five days. Finn seems entranced by the evolution of a single grain into this fragile green chute cradled in his palm. A water buffalo yoked to a Medieval-looking plough is snorting steam like a benign dragon in the corner of the wet padi. “Meet Rudolph,” says Sia.

Before we know it, we’re rolling our trousers up to our knees and entering his realm of mud and water, the kids jumping up and down with excitement. It’s already getting hot and Finn groans with delight as his feet and shins disappear into the cooling ooze and he takes the reins of the noble beast. Ploughing the padi fields with Rudolf was less like battling a Minotaur and more like walking the dog, with a few simple commands: “Ooh” to go, and “Yu” to stop, we all take it in turns doing a lap around the field. Younger kids were also safely able to try their hand at ploughing with the help of Rudolph’s owner.

With our neat furrows left behind us, we head to a nearby field scattered with eerie-looking scarecrows amid waist-high rice. “The rice is three months old now,” says Sia, adding: “We don’t use pesticides or insecticide here, just citronella, so we have to watch out for insects.” In the next section of the field the crop has now segued to a golden colour. “Harvest time,” says our guide, grabbing a handhold in one fist and demonstrating the fluid movement of scything as his sickle cuts elegantly through the crop. He said it was almost like Tai Chi, to get the hang of it you need to relax and stop trying. In fact, by the time we’ve variously threshed the rice, beating it with sticks, winnowed it with a fan, and finally husked it on ancient apparatus under the stilted house – I’ve noticed that my pulse seems to have slowed. In getting in the flow with this ancient physical ritual, my mind has switched off.

We watch as the sum of our collective efforts is gathered into a bamboo steamer and dangled over a bubbling cauldron. His cheeks flushed red, Finn has that exhilaration that comes from spending a few hours outdoors in a natural environment; he hasn’t asked once about getting his phone back, not even to take a selfie. For me this half-day excursion is both an educating way to learn the many stages that go into creating sticky rice, but also a gentle resetting of us world-weary parents into the ‘now’, for while our kids live in the present, we tend to be less able to, our thoughts ever wandering to the future.

Finally, we sit down to kin khao (‘eat rice’). The long table decked in decorously shaped rice cakes and, more importantly, our cooked rice. Finn takes a chunk of the glutinous stuff, rolls it into a little sphere in his hand, as is the Lao custom, and deposits it in his mouth. His smile says it all. Mission successful!