by Lightfoot
All hail the slice! Five New Yorkers set out to capture the food phenomenon that fuels their favourite metropolis… By Claire Turrell

Cronuts, superfoods, farm to fork… when it comes to food trends, New Yorkers love a new discovery. But while food trends come and go, there’s one dish that always remains ingrained in New York food culture – the pizza slice. This home-grown invention is loved by the old, young, rich or poor…

So while street blogger Brandon Stanton is busy photographing the Humans Of New York five New Yorkers decided to photograph the pizza parlours of New York and record what makes them special. One of the founders Gabe Zimmer tells us how the idea for New York Pizza Project  book came about. “As native New Yorkers, the neighbourhood pizzeria has been part of our daily routine since we were kids. Our connection to the pizzeria goes deeper than the food: we love the atmosphere and we love the characters that inhabit them,” he explained. “When we realised that was nothing out there that focused on the people and places behind the food, we set out to change that.” 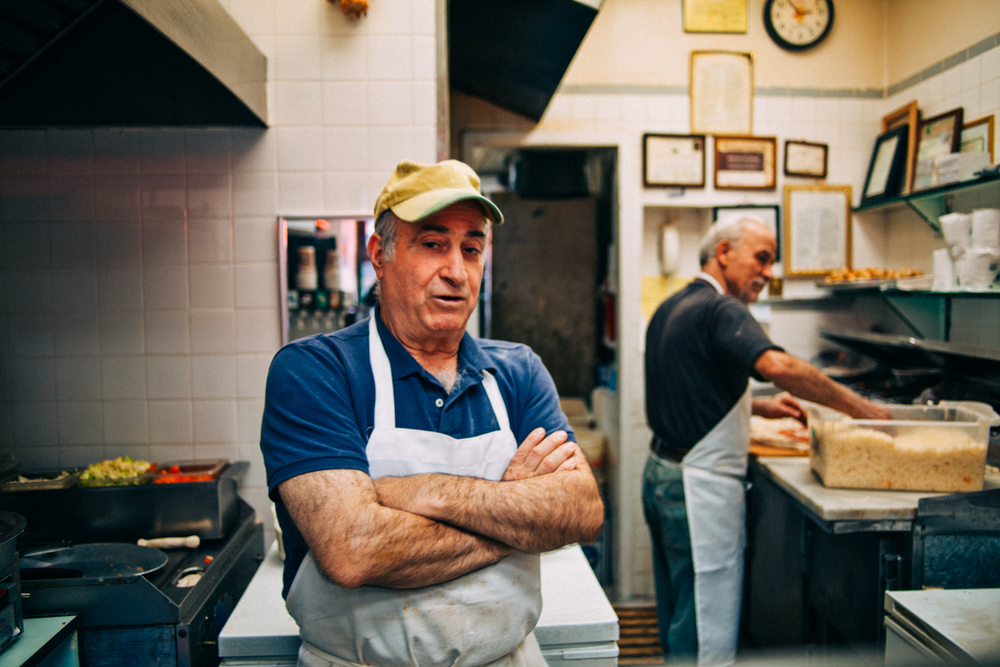 While ex-Chicago bond trader Stanton was learning as he went along with his blog, the New York Pizza Project team already have an enviable group of two photographers, three designers and one product developer. While, they still have a long way to go to hit the one million fan base that Stanton has, it’s clear that the New York Pizza Project has already caught everyone’s imagination. In a world where the similar restaurant chains can be found on every high street, people are looking for authenticity. And the authentic New York experience was what the team wanted to achieve with this book. “We want people to come away with an idea of what these places are really like, so that even if the viewer has never been to New York City before, he or she can get a feel for the character and spirit of a neighbourhood slice pizzeria,” said Zimmer.

To showcase the pizzeria experience they split the book into four sections: The Makers, The Eaters, The Shop and The Block. The five founders – Nick Johnson, Ian Manheimer, Corey Mintz, Tim Reitzes and Zimmer, then spent the four years visiting pizza parlours on weekends and weeknights to record the information needed. 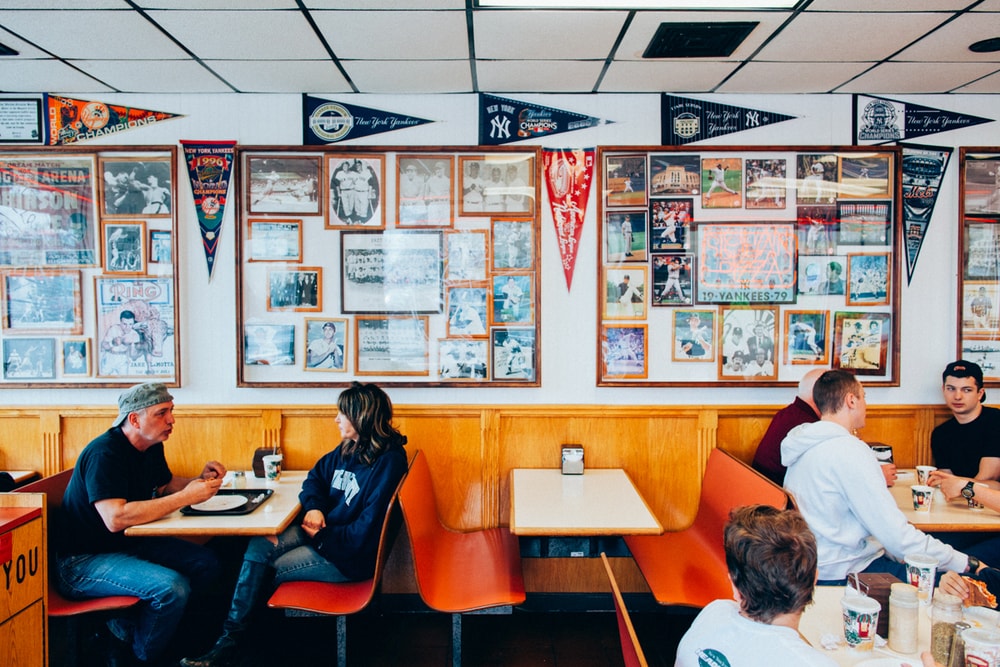 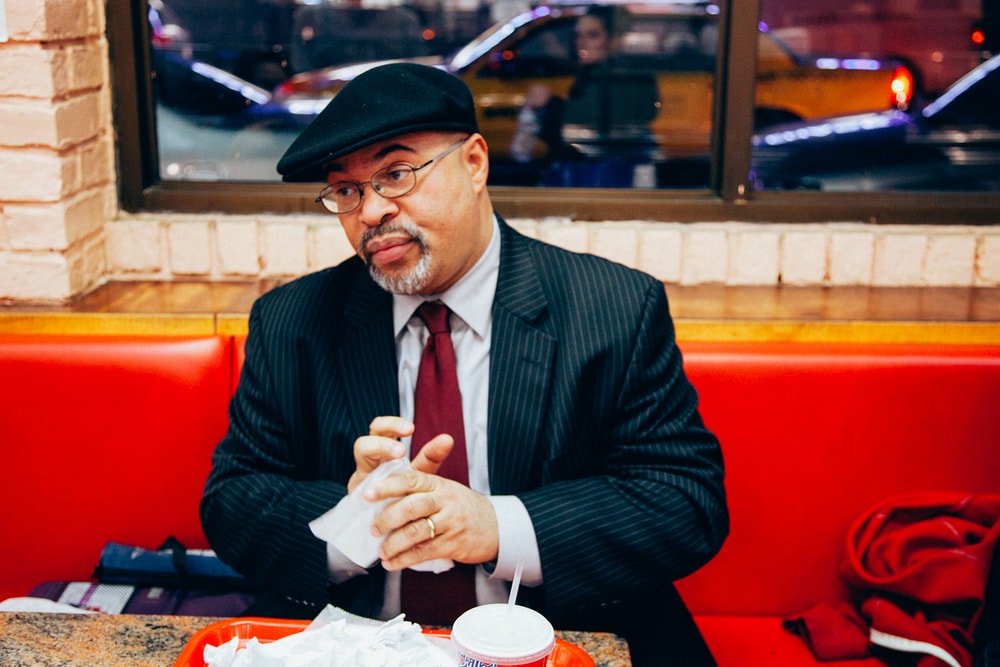 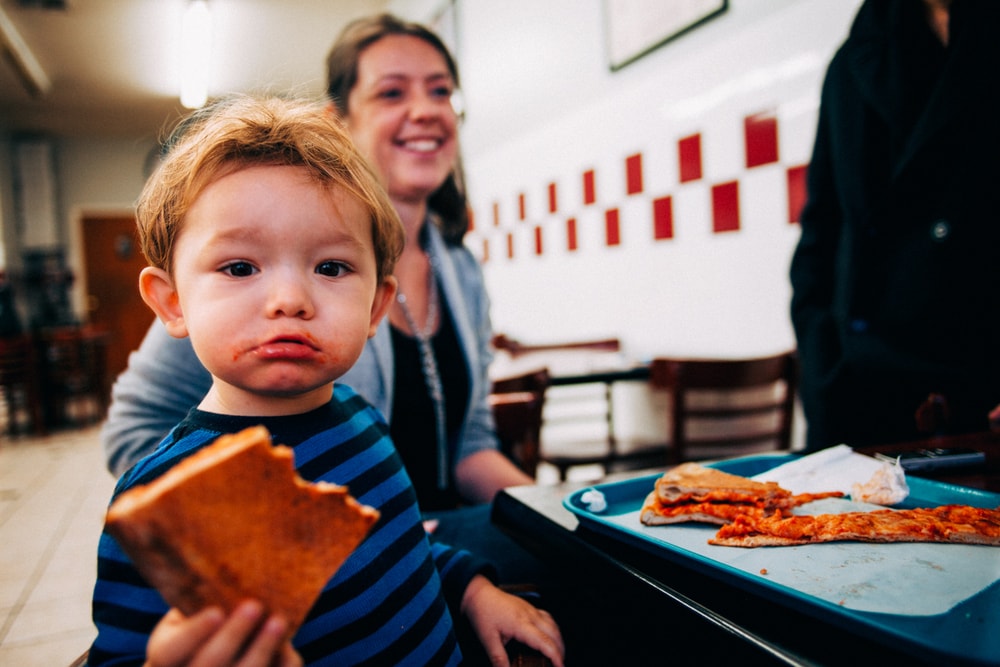 “We started out with the places we knew and like and from there we explored each borough. We used a combination of online research and word of mouth to discover places that we didn’t know about,” says Zimmer. “The only criteria was that they had to serve by the slice and were not part of a chain. Other than that, we just trusted our gut and explored.”

Zimmer adds that you can always tell a good slice pizzeria by the conversation taking place between the customers and the people behind the counter. “In the age of the internet, it’s one of the few remaining places where person-to-person communication is alive and well,” he says.

The New York Pizza Project team would start by chatting to the owners and the people at the restaurant and then tell them a little about the project and ask if they would be happy to take part. And while a few people might turn them down, more often than not, people would be happy to have their photograph taken or tell them a story. The result was that they took tens of thousands of photographs and interviewed hundreds of people.

One of the people happy to talk to the team was John Brecevich of Patsy’s Pizzeria in Harlem who told them why this 1950s Brooklyn creation was still part of the culture. “This is part of New York. You can’t take the slice of pizza from the city of New York and the culinary history of this town. It’s part and parcel of who we are. And it’s non-discriminatory.” 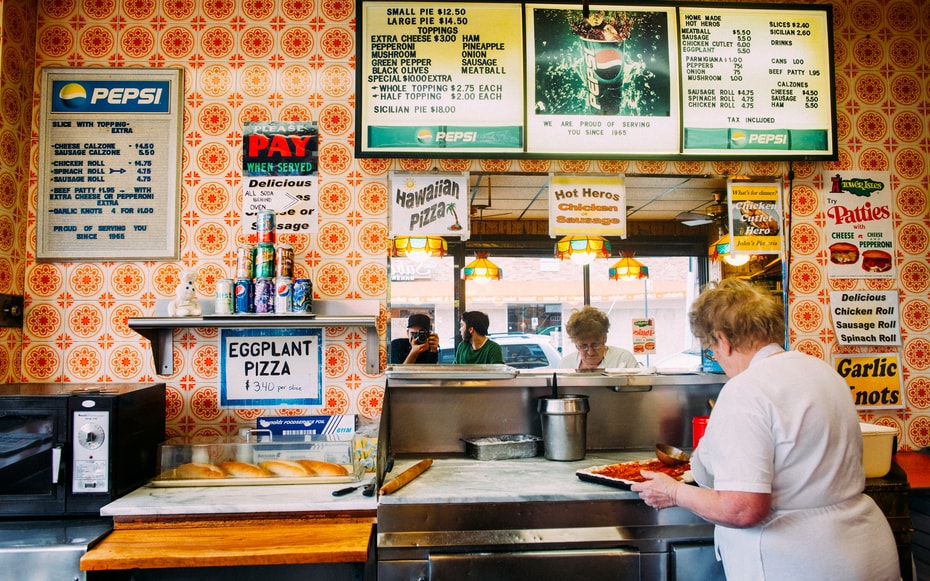 One of the biggest characters Zimmer said they met was Sal, the owner of Pugsley Pizza in the Bronx: “He treats his pizzeria like a carnival. He rings a Japanese gong every time a pie is ready, and if it’s someone’s birthday, he will turn out the lights, light some candles, take out his trumpet and play happy birthday to them.”

And the customers were just as fun to meet too. “I love the answer that Ken at Famous Ben’s Pizza in SoHo gave us when we asked him what brought him there,” said Zimmer. “He explained ‘I like cheese and it’s a good way to get a little bit of cheese. I live alone, so I don’t usually keep cheese in the house.”

The stories combined with the photographs formed an enticing combination for pizza lovers in New York, so when the New York Pizza Project team launched a Kickstarter campaign in 2014 to help them find funds to self-publish a book, it wasn’t long before they were able to send the coffee-table tome to the printers.

While it’s a fun way to celebrate a home-grown food, it is also a great way to show some support to the local community. “The cost of rent in New York City has increased dramatically over the past 10 years and it’s becoming harder for pizzerias to turn a profit,” says Zimmer. “We see these places and other mom and pop businesses slowly disappearing and being replaced by chain stores and luxury condos.”

The book may have hit the shelves, which could have given the team the chance to try another food group. However, when asked if they still eat pizza, Zimmer is resolute: “Definitely – at least once or twice a week.”

Explore the winter wonderland from a ship, kayak in stunning fjords, go whale watching, and hike through mountains and forests on a luxury holiday in Alaska with Lightfoot Travel.

New York is a wonderfully multifaceted metropolis – somewhere where every language, culture and cuisine is represented – divided into five boroughs, each with their own distinct personality.

Celebrity chef David Myers who owns LA’s famed Hinoki & The Bird, Adrift in Singapore and Salt Water and the Davi...