Wrapping her pashmina tightly around her, tucking her feet beneath her body in the chair, and twiddling with a gold ring so much that it spins off her finger and rolls across the polished wooden tiles on the floor… It’s not hard to see how South African freediving champion Hansli Prinsloo feels like a fish out of water when she’s on dry land. But when she’s in the water, it’s another story. She is, as she says herself, ‘part of the picture’.

That’s not to say she’s a dithering wreck when on terra firma. Her life is a whirlwind of Ted X, leadership conferences and talks to clubs to help inspire them to take a step into the underwater world and hopefully love it as much as she does.

When she is in the water she says she feels ‘present’ and encounters a stillness that she doesn’t experience anywhere else. “I wish I could be more of the Hanli that I am in water on dry land… But it’s still a work in progress,” she confides with a laugh.

Her home for today is Singapore’s private members club 1880. She spent the night before talking to its members about her underwater adventures and she and her partner Olympic swimmer Peter Marshall are now busy prepping for another talk the following night.

The world record holder Marshall was looking for a new challenge after a glittering backstroke career in the pool. A friend introduced him to Prinsloo and Marshall fell for the raven-haired freediver and her way of life hook, line and sinker.

The two of them now run I Am Water in Cape Town, South Africa – a foundation that Prinsloo created after she was transitioning out of her own sport of competitive freediving.

Prinsloo’s first brush with freediving happened when she left her landlocked home of Pretoria in South Africa, and moved to Sweden to study acting. Apart from childhood yearnings to be a mermaid while making a splash in the local rivers and a brief scuba diving holiday with her sister, it wasn’t until Prinsloo reached the icy fjords of Sweden that she found her calling.

It was there she met Swedish freediver Sebastian Näslund, who invited her to join one of his trips. It wasn’t the most spectacular start to a new career, but when Prinsloo hit the icy water of the fjord and dived down 15 metres, she was hooked. Unlike scuba diving, Prinsloo found out that she couldn’t rely on a tank of oxygen, she just had to use only the air that she had in her lungs to complete the dive. “The wetsuit I was wearing didn’t fit, the mask was fogging up and there was zero visibility,” Prinsloo explains. “I managed to hold my breath, swim down and hold on to a ledge. There was nothing to see, but I had that sense of the stillness and the coming home." 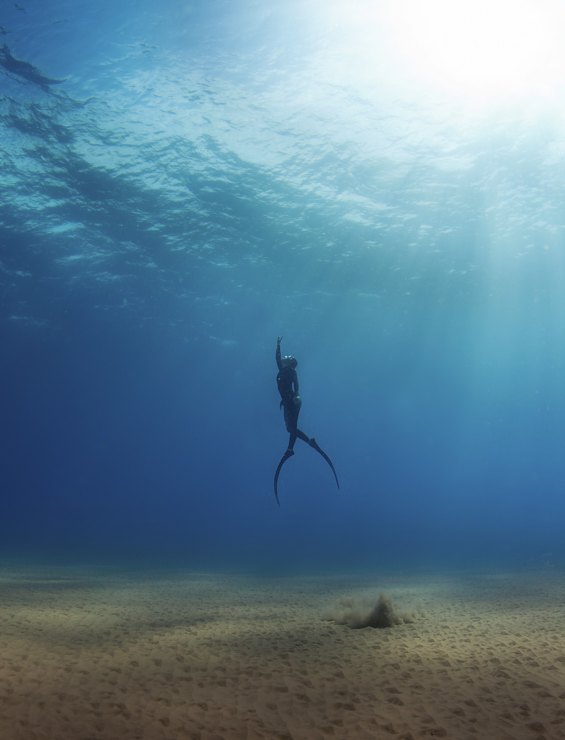 She believes that the rough start was more of a blessing than a curse. “I think if one learns how to do something in suboptimal conditions you tend to become more resilient. Today, that’s what makes me both the coach and freediver I am. I didn’t learn in perfect conditions,” she says.

This short, sharp taster was enough to make Prinsloo find out more about the sport. She started to work with a coach and entered her first pool competition in 2003. “During my first competition I broke the Swedish, South African and African record, so I wanted to see how far I could go,” says Prinsloo. Seeing how far she could go saw her representing South Africa at the freediving championships in Dahab, Egypt in 2006; breaking her 11th South African record by 2006 and becoming the first South African to hold records in all six free competitive diving disciplines simultaneously by 2010. She would reach a depth of 65 metres on one breath – 25 metres deeper than an average scuba dive, which is done with the help of oxygen.

She says that when you can compete in any sport at a high level, it’s an extreme sport, but as a practise, Prinsloo believes that freediving is as extreme as yoga: “In most sports, you psych yourself up for your big performance, with freediving your whole practise is about slowing down your heart rate. It’s the opposite of anything to do with adrenalin.”

While competitive freediving came with the rush of the ‘freefall’, which Prinsloo describes as “a sucking embrace – it’s like the ocean is holding you,” she also had to dive with her eyes closed. “Your brain uses a lot of oxygen, the more you can deprive your senses, the more you can slow down your mind and your metabolism,” says Prinsloo. “And I think that’s why it was so easy for me to walk away from competitive freediving because I want to see the ocean now with my eyes open.”

Prinsloo says that her whole reason for diving now is to interactive with the wildlife. And who can blame her when every day for her is like a David Attenborough documentary? Her schedule now reflects the migratory patterns of humpback whales, sperm whales, manta rays and sharks as she follows them around the globe. The environmentalist has decide to dedicate her life to protecting the world that she loves – and the best way she believes to encourage people to protect the ocean and its creatures is to show it to everyone.

Prinsloo now takes groups to freedive with humpback whales in the South Pacific, whale sharks in Madagascar and dolphins in Mozambique. Once you hear about some of her adventures, you’ll also want to strap on a fin. From dolphins passing her seaweed to encourage her to take part in an aquatic version of football and whales using her as a babysitter to getting a front row seat at a humpback whale concert under the waves. 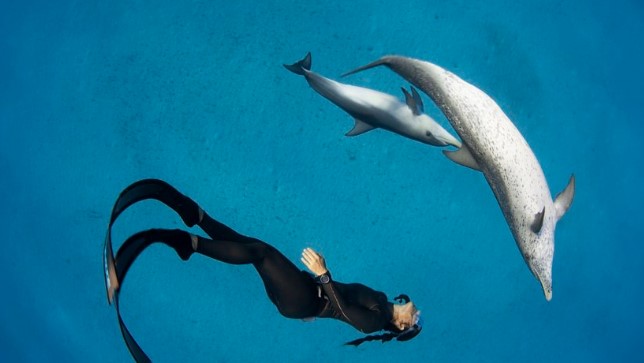 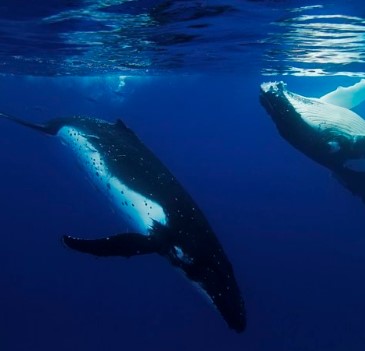 Without the noise and bubbles of a scuba dive tank, Prinsloo believes that the animals feel more confident to approach her. “My feeling is that in scuba diving you’re a visitor, but when you’re freediving you become part of the picture, part of the play,” says Prinsloo.

Her main reason for running trips and flying all over the world to give talks is to help fund the I Am Water foundation. The charity gives underprivileged children the chance to experience the sea by offering them free snorkelling sessions and help them discover the sea life along their own shoreline.

“I started I Am Water to try to give opportunities to especially kids who haven’t had access to the ocean,” says Prinsloo. “We have started living such urban separate lives from nature we have started believing that we are separate from nature, but we are not. We are part of something bigger. Once we feel that connection, it impacts our behaviour.”

She has now rolled the scheme out to other countries such as Mozambique, Ecuador, Maldives and Bermuda. This year they plan to launch the project in Madagascar.

However, this is just one of Prinsloo’s prongs of attack to help save the ocean. She is working on two documentaries, is about to launch an online site to sell reef-friendly beach buys and is creating a cookbook filled with sustainable seafood recipes.

She also has her eye on her next dive, which will take her back full circle to those icy waters. “I have this incredible yearning for the frozen oceans – the Arctic particularly,” says Prinsloo. “The opportunity to swim with narwhals and beluga whales would be incredible. I feel like the frozen oceans are our next frontier.”

For humpback whales I would go to this small island called Niue in the South Pacific. I’ve never seen water that blue – it’s unbelievable. You’ll see dolphins, sea snakes, moray eels, huge Napolean rass, sharks… It’s really special. There are only 1,200 people on the island. So you have more animals than humans in your vicinity, which is my kind of place.

We went to the north-western tip of Madagascar last year and I can’t wait to go back. We swam with a friend of mine who is a whale shark researcher. Within the crystal blue water you’ll see whale sharks, turtles and dolphins. It’s the same place that they’ve discovered the Omura’s whale, which was only discovered in 1995.

I love to go to Southern Mozambique to swim with the dolphins. The dolphins that are resident to that stretch of coast and remarkably interactive.You never know what you are going to see in Southern Mozambique. Sometimes you find manta rays, or whales, or a tiger shark, anything in that wild ocean.

Jacques Cousteau called it the world’s aquarium. We go to the Sea of Cortez to swim in this marine reserve that has been protected for over 25 years called Cabo Pulmo. There are masses of giant schools of jack fish. You just don’t see that biomass of life anymore, anywhere… It’s like going back in time.

I have a soft spot in my heart for the very misunderstood sharks. For the sharks, we keep going back to the Bahamas. Hammer head sharks, reef sharks… It’s unbelievable diving around the Bahamas.