Learning How To Be A Gaucho In Argentina | Travel By Lightfoot

LEARNING HOW TO BE A GAUCHO IN ARGENTINA

Dust flies and a plume of crimson blood streaks across Patagonia’s flawless blue sky. Seconds pass, then minutes, until before long, the scene around me resembles a gruesome set from a Quentin Tarantino movie.

The blood-splattered gauchos, look nonplussed. Wiping their falcons (knives) on their baggy bombacha trousers they methodically move onto the next steer, occasionally picking up a handsaw when faced with a tough one.

It’s a strange way for a vegetarian to start the day, I think, but then again there’s nothing sinister about the goings on here — and not a whiff of death in the air. They’re simply following a century old tradition, removing horns to prevent the cattle from maiming each other.

This 1,000-strong herd is the life blood of the gauchos on this estancia and my job is to help muster 180 of them into a narrow timber corridor so that each and every one can be inspected. I’m here to learn the life skills of being a gaucho, although I suspect I may, however, change my mind come dinner time.

Like their American counterparts the cowboys, Argentina’s gauchos are a revered bunch. Descendants of Indians, they have a long tradition of horsemanship often working for wealthy landowners exporting wheat and meat. Some became skilled cavalrymen defending the frontiers against European invaders in the 19th century, but today most work the land which means there are numerous ranches happy to put tourists like me through the ropes.

I’ve chosen a 50-acre working estancia which I’m told is the real deal. At Caballadas, they’re not interested in staging a show or spectacle. Guests can join in whatever job is necessary — be it vaccinating cattle, fixing a fence, or even deliver a calf — but there’s no text book training. Your horse will be your teacher and your gaucho a visual guide (they don’t, I discover, tend to talk very much).

As a keen rider and horse owner, I’m glad to have a head start. But even complete beginners won’t feel out of their comfort zone. Gauchos rarely, it seems, gallop across vast expanses of verdant pampas and most of the riding is done at a jig jog with a faithful dog at your heels.

Our gaucho Eladio has wisdom etched on his face. He’s picked our mounts from a team of 60 criollo horses and, with scant knowledge of our ability, he instinctively knows our perfect match. A nervous guest is soon at ease with her laid-back gelding with a gentle, dependable disposition, while a friend David has an exuberant youngster. My mare, Ferrari, like her name, is quick and agile, and despite her diminutive size, has impressive strength and endurance carrying my weight as if I were a feather. 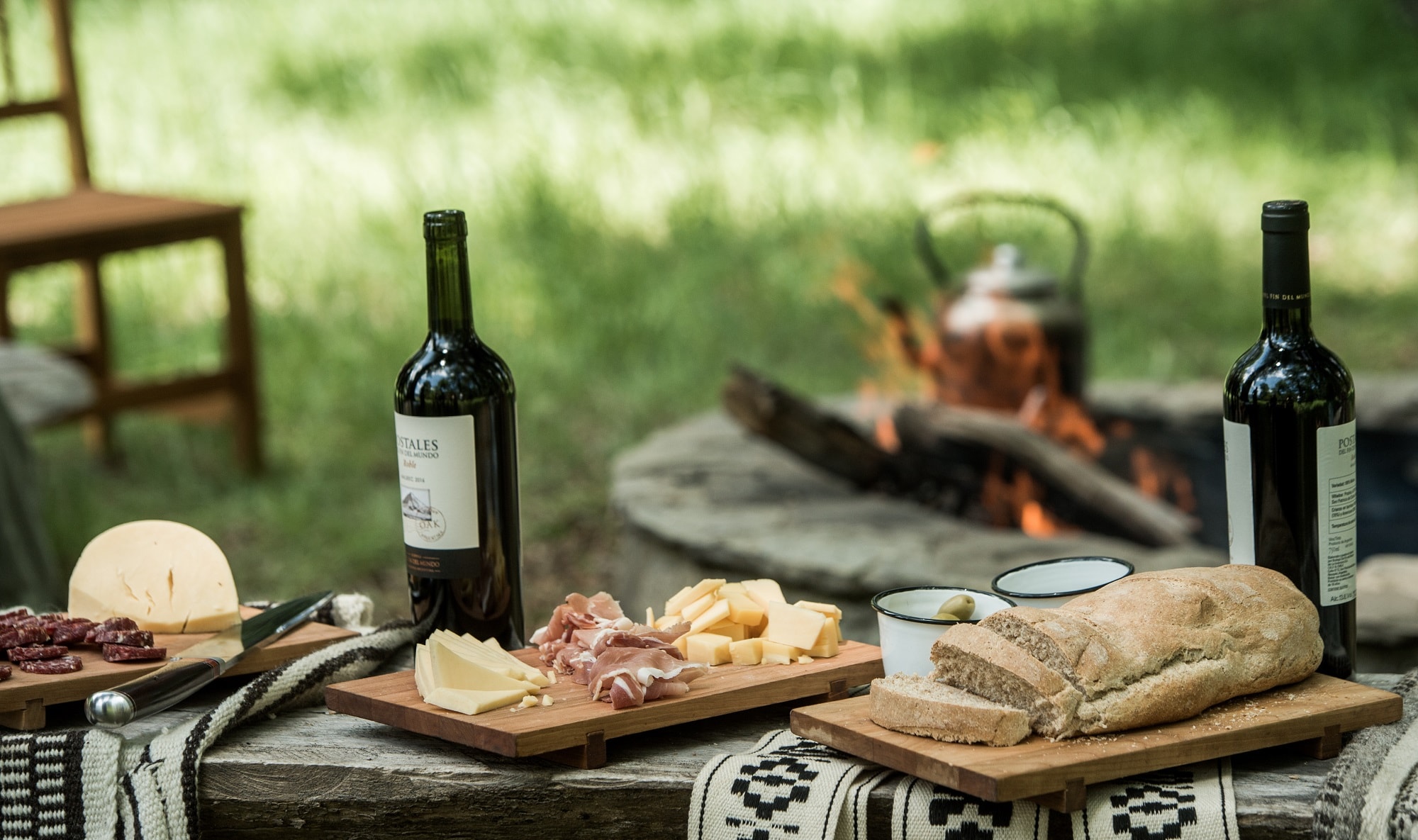 Tacking up is alien to me, with girth’s tightened using knots not buckles, and while some guests struggle mounting, we try our best to emulate Eladio as he elegantly hops onboard unaided.

He guides us effortlessly up and down steep rocky escarpments and through dense forests using facons to cut back the undergrowth and we learn how to traverse deep flowing icy rivers and tether our horses, before scooping up fresh water with camping mugs to quench our thirst.

Like many gauchos, Eladio is a man of few words, but when he speaks we all listen.

He teaches us to track wild animals and while his keen eye pointing out the paw prints of a puma, all we spot are vultures, wild horses and cattle — and Lanin volcano in the distance, its conical summit piercing Patagonia’s indigo skies. 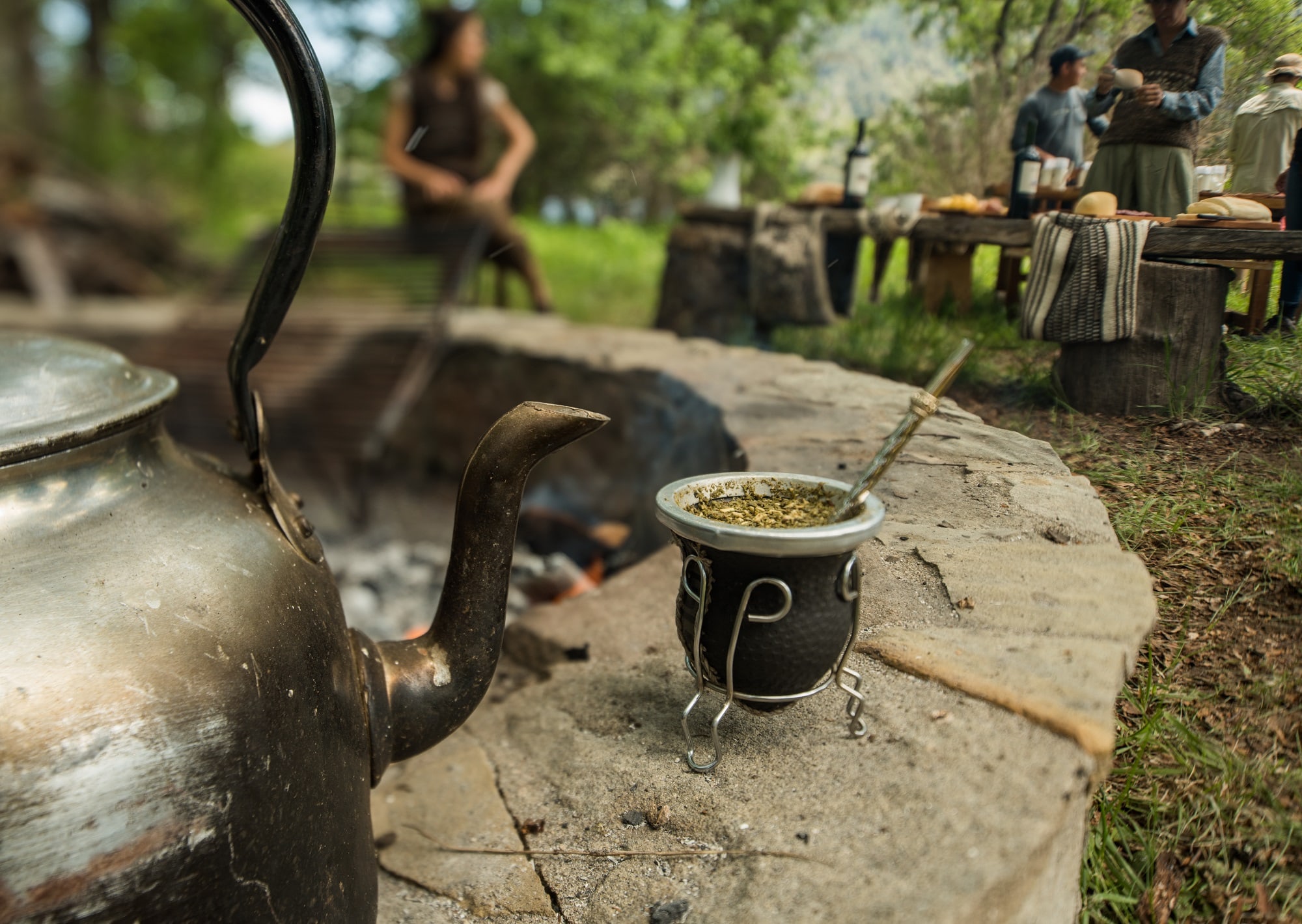 After a few hours in the saddle we arrive at an immense grassy plateau and meet two other gauchos in stylish berets. Our task, we’re told, is to herd some docile Hereford cattle into a pen, but the glint in their eyes makes me suspect they know we will fail. Sure enough, our exuberant actions soon send the herd cantering off in all directions and we are forced to start the entire process from scratch.

Thankfully we don’t need to use a lassos or boleadoras — a throwing device with three lumpy, leather-bound balls used to catch runaway cattle. But we can learn back at the ranch, they smile, (if we sign a disclaimer).

After a few hours of ‘work’, we brush off the dust and head to a nearby barn where an asado (BBQ) has been a long time cooking. The gauchos show us how to cut huge hunks of beef with their facons that also double as forks.

While I forgo the meat, I join in the gaucho tradition of passing around yerba mate, Argentina’s national beverage, a caffeine-enriched infusion. Made from the leaves of a species of holly, it has an acrid taste that isn’t quite as pleasing as the country’s other better known brew, Malbec.

Lunch over, there’s time for a short siesta in true gaucho style before another long ride back to the estancia.

I grab my sheepskin saddle cover to use as a pillow and pick a shaded spot under a tree. Nearby, someone’s slipped into a deep slumber, snoring contentedly, and it’s not soon before I join them.

I may not eat like a gaucho, but after four hours in the saddle, I don’t find it difficult to sleep like one. 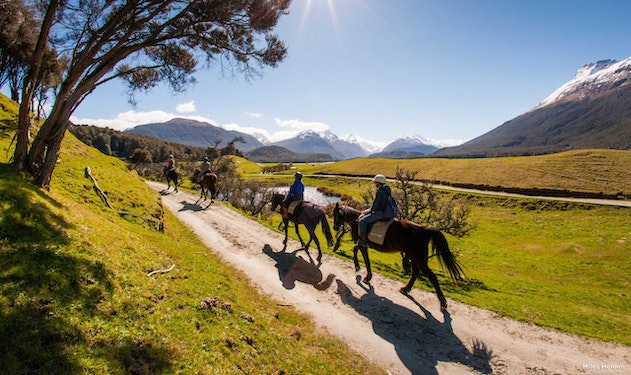 LORD OF THE RINGS HORSE-RIDING EXPERIENCE