THE LANDSCAPES OF NORTHERN CHILE

The adventure begins once we leave Santiago behind us and head to the north of the country. My boyfriend and I decided to travel by bus, just like the locals do. We’d considered a Che Guevara-inspired motorcycle journey (impossible because of my very bulky photographic equipment), so we took the bus.

Our colectivo arrived at the terminal 10 minutes before departure, which was just enough time to take possession of our panoramic seats – front row on the upper deck. We made ourselves comfortable and I fell into a deep sleep shortly after we left the city – the darkness quickly swallowed the coast and the wasteland around us. The following morning, I woke up early enough to enjoy the first rays of light over a horizon of scrubland and sparse vegetation, which turned into a surreal horizon of red rocks as we left the coast behind us and headed inland. Here and there, something would appear by the side of the road – an abandoned bus stop maybe, or the odd sanctuary dedicated to the saint on duty. Every now and then, the equally bizarre sight of a scarecrow made out of plastic bottles would come up, although there was no sign of either crops or birds.

Distances are a totally different concept there. Travelling by bus is a meditative thing. After a 20-hour bus ride, a night in the unpretentious Antofagasta looked like a much-needed stop. A port city with few attractions to detain travellers, Antofagasta still managed to keep us entertained: a walk along the seafront, a dip into the chill waters of the Pacific Ocean, a few sleepy-looking sea urchins, a superb lunch of choclo (sweetcorn and beef pie, a staple part of my diet since I set foot in the country). My greatest souvenir has to be the view from our hotel room, though – a sea of flat rooftops and the yellow nothingness of the desert as far as the eye can see.

Another bus journey awaited – this time all the way to San Pedro de Atacama, the gateway to the vastness of Grande Norte. San Pedro in itself is a resort town of unpaved streets and single-storey houses, dotted with more travel agencies than you can ever imagine. We soon found out that exploring the desert was virtually impossible on your own and booking excursions was the only way.

We found a place to stay in a former farmhouse some 15-minute walk from the hustle and bustle of the centre. We were greeted by a lovely lady with small blue eyes and a gentle smile. She made us our first mate de coca – tea brewed from coca leaves – to relieve the first effects of altitude. I still don’t know her real name – she was known as “mami” – but the aubergine pasta lunch we shared with her around her tiny kitchen table is still one of my most treasured memories from my time there.

I was very fond of our daily walks into town, of the layer of dust on my shoes at the end of each day, of the imposing shape of the Licancabur volcano, far in the distance towards Bolivia, which became a familiar sight every time I stepped out in the garden. We usually spent one day on the excursion and the next one resting in town, constantly munching on coca candies in order to get accustomed to the high altitude.

We had a tiny, windowless room. The bathroom was in a separate building on the other side of the courtyard. A bit of a torture early in the morning, when temperatures were still low owing to the desert climate. I once woke up in the middle of the night – on my way to the loo I raised my eyes and was greeted by a startling bright Milky Way. The skies of Northern Chile are among the clearest in the world and just as otherworldly as the landscapes. Firstly, not being used to the Starry Vault of the Southern Hemisphere, I felt as if I was peering into outer space from another planet. Secondly, the combination of altitude, little rainfall and lack of light pollution creates the ideal conditions for observing the skies. One night we joined a stargazing tour, hopping from the telescope to telescope and looking at the universe above us. Stars have always made me emotional since the moment I first looked at the moon through my dad’s binocular and burst into tears. Zooming in into a far-away nebula had pretty much the same effect on me that night.

The wonders around San Pedro are countless – the Salar de Atacama, Chile’s largest salt flat, is only a short drive away and it is an unforgettable experience: a jugged white crust which stretches as far as the eye can see. Several shallow lakes can be found there, from the Laguna Chaxa, whose shoreline is dotted with the pink of the elusive flamingos, to the Laguna Cejar, where the salt content is so high that you can happily float on the surface. Stretching along the eastern side of the Salar de Atacama is another series of salt lakes and salt flats, such as the Salar de Aguas Calientes and the gleaming Miscanti and Miniques lagoons, with their huge shimmering pools of deep blue, ringed with white ribbons of salt. It is a landscape of a surreal beauty, almost overwhelming at times.

Chile’s wildest region is one of the driest places on earth, with very little in the way of human development. The higher the altitude, the simpler the landscape. First, you lose the trees, then the paved road gives way to dirt and your phone signal goes – big, green signs warn you are incommunicado until you reach the Argentine border. Above 4,000m, our 4×4 treks were accompanied by the peaceful wanderings of llamas and herds of vicuñas – elegant, camel-like creatures who manage to survive on this otherworldly landscape. The definition “middle of nowhere” acquires a brand-new meaning for me.

The Moon Valley – Valle de la Luna – was probably my favourite spot, although it’s very hard to pick one. The name is self-explanatory as the atmosphere is truly incredible. Its Moon-meets-Mars landscape is especially photogenic at sunrise and sunset. Not being much of an early riser, I opted for the latter option. Having been warned about the hordes of tour groups flocking there, I was ready for the worst. That wasn’t the case. The empty vastness of the area made me feel almost as if I had the entire place to myself. I made my way slowly up the giant sand dune along a marked trail, then walked up the crest of the dune for a better vantage point. The strong, chilly wind was the best possible soundtrack for my thoughts. The other people looked like tiny dots on this immense canvas. I probably looked the same to every one of them. A small, happy dot – and pretty much on top of the world.

The Atacama Desert covers an area of 5,400 square miles in northern Chile, around 8,000 feet above sea level. The super-arid terrain and arroyos only tells one side of its extreme beauty; in fact it’s the breadth of spectacular landscapes. 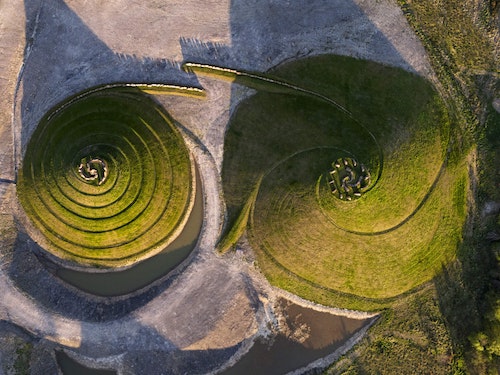 AROUND THE WORLD WITH STEVE MCCURRY

Famed photographer Steve McCurry was invited by watch brand Vacheron Constanin to fly around the world and capture th...

LIVING OFF THE LAND IN CHILOÉ

Sarah Staples explores the bountiful side of Chilean Patagonia