HORSEBACK RIDING THROUGH THE COLOMBIAN JUNGLE

The Colombian Jungle. When you hear these three words you instantly know that you are going to have an adventure.

My friend and I had just one night free during our five-day stay in Cartagena, but we decided to make a six-hour drive to Santa Marta’s Tayrona National Park so that we could have our own jungle adventure. On our micro adventure we would get to travel through the jungle by horseback and sleep in hammocks on a wild, private beach.

We arrived at the mouth of Tayrona just around noon, as the unforgiving sun rose to the highest point in the sky. But the oppressive heat did nothing to quash our excitement. After six hours in the car from Cartagena to Santa Marta, we were just happy to be in the fresh air.

We could see the stable hands busying themselves, strapping cargo to some of the horses that were so well trained they would make the trek through thick jungle to one of Tayrona’s beaches and back on their own.

We were bound for the park’s most picturesque beach Cabo San Juan del Guia. We had heard a lot about this breathtaking stretch of shoreline that is dotted by monolithic rocks. It’s a place so prehistoric in its appearance, it may as well have been plucked out of the imagination of a Flintstone’s storyboard artist.

Ready for the adventure ahead of us, we were then introduced to our glossy maned team-mates for the day, Bruno and Marco. My friend, an experienced rider, climbed onto clay-colored Marco with dexterity and slipped her feet into the rusting stirrups. I on the other hand, had never ridden before and needed to be helped up one of our guides. With bags strapped on and a quick tutorial from our guide, we set off at a walking pace.

It was surprising, just how quickly the tarred road disappeared behind us once we set off. The uneven sand path that ran through the thick of the verdant forest rose and fell underneath us. I started to get used to the instability of my new 4WD. Each dip in the terrain would prove to be another test. Obviously feeling my new found confidence, Marco suddenly started to pick up speed. It wasn’t long before we started to gain on my friend and the guide just ahead of us.

I screamed out to my guide in a cocktail of English and Spanish, if the horse’s erratic movement was normal. So the guide ran back to calm Marco down and me at the same time.

Now with my heart rate back to normal, it struck me that I was in the middle of the Colombian jungle. After all the months of planning, we were now actually here, riding through one of the most beautiful places on Earth. It was hot, humid, but we couldn’t have been happier. The towering trees appeared to stretch out before us to infinity, and the jagged moss-covered rocks lined our way as we were treated to a soundtrack of chirping birds, rustling leaves, and the clickity-clack of determined hooves.

About an hour into the ride, the sounds of fauna gave way to the rhythm of waves lapping the shore. We came to our first clearing before the beach where a woman and her husband had set up a small café selling arepas, the ubiquitous Colombian flatbread made from ground maize. The clearing in turn opened up to the Playa Castilletes beach. A stark contrast to the vertiginous trees we’d just been riding past. The beach felt suddenly flat and alien, a different world within another world. The entire strip of shoreline was empty. We tied our horses to posts and wandered along the beach and dipped our feet in the water.

But with time pressing, we had to saddle up again for the final stretch of the ride. As swiftly as we had slipped out of the jungle, clicking hooves slipped us back right back into the copses. Occasionally other unmanned horses and donkeys carrying sacks of supplies would pass us by, running in the opposite direction. Always, as a line of them passed us by, I was amazed that they had been trained to do this journey unsupervised.

Soon enough, we could hear the ocean again from beyond the trees. We had finally reached Cabo San Juan. Climbing off our horses we walked through a gathering of tents, past a stand where a merchant sold an eclectic combination souvenirs and swimwear, and beyond a beach shack where the only meals on the beach could be purchased.

Cabo San Juan looked just as it had in the myriad photos we’d pored through on the internet while planning this adventure. I ripped off my shoes and socks and sank my feet into the sand, walking toward the cliff-top cabana that would be our sleeping place that night. The shore was bookended by the emerald waves of the Colombian Caribbean voraciously lapping the shore on one end, and mountainous jungle with the calls of its wild animals on the other.

Truly, that is what our time in Tayrona was: a symphony; a marriage of fantasy and reality, a mélange of earthy colors from emerald to dusty brown, moments of fear that melted into laughter and now, a memory for the ages. The Colombian jungle: it is not nearly as scary as it sounds. In fact, it’s a bit of a dream.

Experience Colombia’s spectacular and diverse landscapes of the Amazonian rainforest, Caribbean and Pacific beaches, and majestic Andean peaks on a luxury family holiday to Brazil.

Cartagena is a city for sun kissed relaxation, for history and culture and for enjoying a little of the Caribbean-spiced way of life. 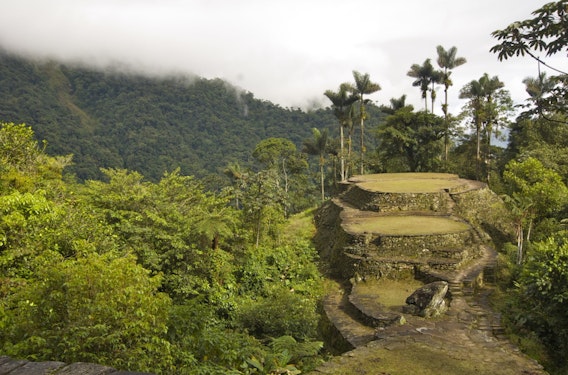 5 AWESOME THINGS TO DO IN COLOMBIA
Read more