HORSEBACK RIDING WITH A CHILEAN COWBOY

The mountains were vast, the sky was endless, and only the sounds of birds calling and our horses’ footsteps could be heard. There were no other people in sight and no trails in the trails in the remote Chilean wilderness — I was relying completely on Lucho, the experienced cowboy who led the way across the tall, grassy plains and through the trees of this desolate landscape.

Patagonia is a wild and rugged place, and riding horseback through the Sierra Dorotea Mountains was an adventurous, yet peaceful, way to explore and take in the inspiring beauty found in Southern Chile. Here in the Ultima Esperanza Seno — “Channel of Last Hope” — fjords carve through craggy mountain ranges that creep down hundreds of miles to the Balameda Glacier, near the end of the South American continent.

Lucho had greeted me at the estancia (ranch) in silence, with a bone-crushing handshake. He had a rough, windbeaten face beneath a jaunty black beret, and was dressed in the poncho and baggy gaucho pants that were the traditional garb for a baqueano, as Chilean cowboys are called. He clearly had an unspoken connection with the horses as he checked their saddles; the animals moved in tune with him, seeming to know what he wanted before he touched them. 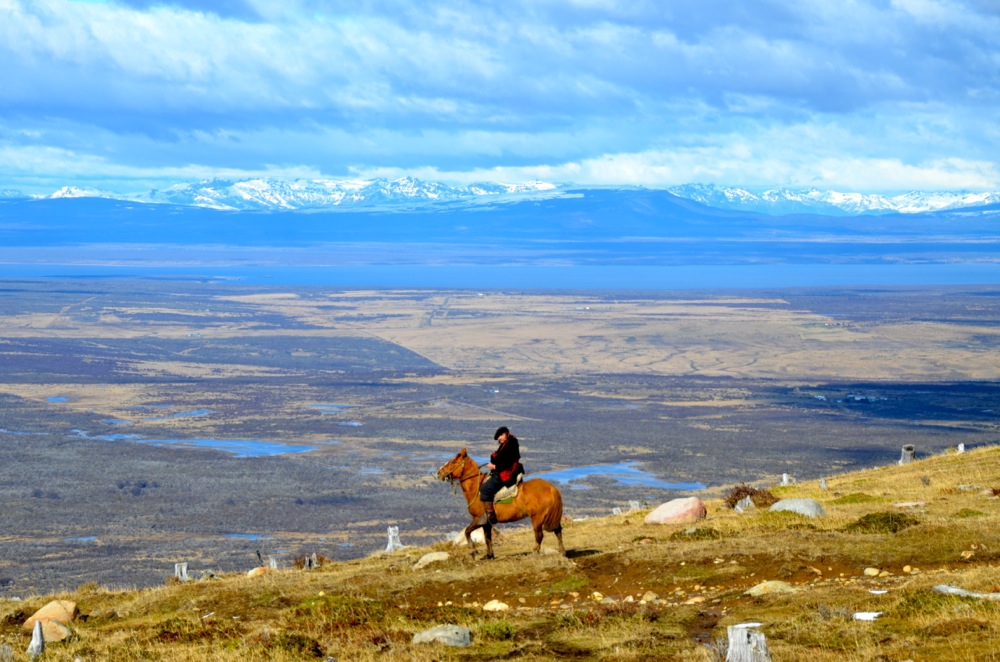 We had then set off on horseback without a word, quickly climbing past the log fences of the lonesome ranch and out of sight of civilization. Lucho’s solemn and stoic manner was typical of the baqueanos, who spend most of their lives in solitude in this great expanse of land. He worked the ranches, taking in new horses and taming them, rounding up sheep and cattle in a lifestyle rooted in time and tradition. Lucho was clearly knowledgeable about every nook and cranny here, leading our horses easily along craggy cliffs, shallow streams and the occasional snowdrift, which became deeper the higher we climbed. I knew that a person who had not lived and breathed Patagonia their entire life would easily get lost in this wilderness.

The true skill of the baqueano is that of the pathfinder; he knows how to orient himself at all times, using the sun, the stars and the landscape to find his way. They are famed for knowing how to find shelter and clean drinking water in the middle of nowhere, and it is said that they can find their way anywhere; even in the all-encompassing darkness of the Patagonian night.

Until recent years, these forests were the only source of building and firewood for the estancias; some locals would go into the mountains with wagons and bulls, where they would live for months at a time gathering wood before going back down to the valleys to sell it. An isolated existence, indeed. 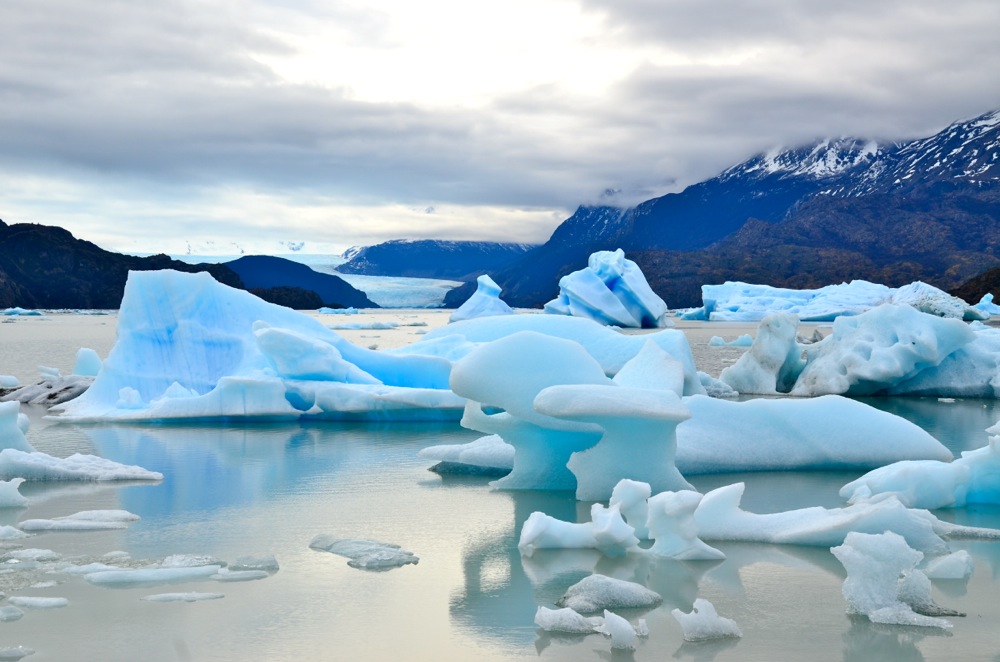 We rode without speaking, picking our way among rocks and fallen trees. Lucho smoked one cigarette after another as he rode. The silence was comforting, reverent almost; it felt as if speech would break the spell cast by the untouched nature that was all around us. As we crested ridge after ridge, the forest gave way to sweeping drops over thousands of feet.

Lucho stopped occasionally for me to admire the view, though he remained fairly uninterested in anything beyond his horse, his cigarettes, and this land. It’s not that he was rude, but outsiders were simply not a factor in his world, beyond not letting us become lost forever in this outback.

My horse beneath me, though I could not remember his long Chilean name, was strong and dependable. It was certainly not the nose-to-tail, broken trail horse that one often finds in riding excursions meant for tourists. Yet he was calm and trusting, sure-footed and dependable. The Chilean horse is one of the oldest equine breeds in the Americas, and perfectly adapted to the life in Patagonia. He responded easily to my commands and I trusted him in return. 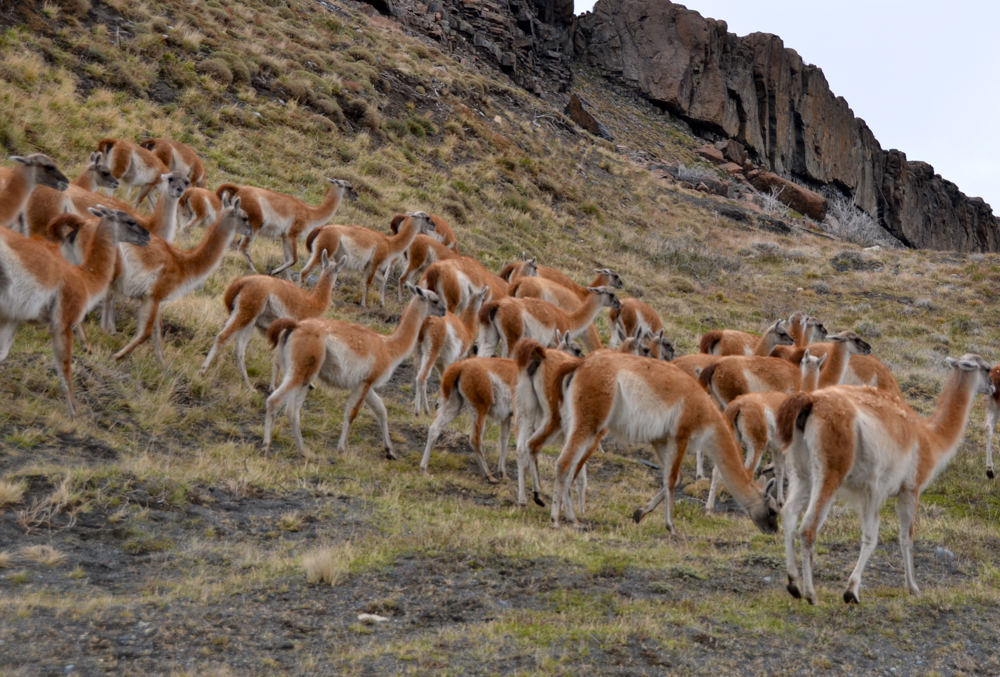 In one direction, far below were the lakes and fjords. Across to the east, over the next mountain ridge, was Argentina. The horses began carefully picking their way up a steeper incline covered with loose rock, and I was looking at the path below when suddenly we came to a stop. Glancing up, I saw that we had come to a mesa overlook. Framed by two massive granite rocks, a breathtaking view was before me: a deep purple valley framed by snowcapped mountains in the far distance, a dramatic landscape formed by centuries of cataclysmic earthquakes, glacier movements and volcanic eruptions.

Lucho dismounted, unsheathed a carved silver knife at his belt, and began hacking away at small tree branches. Soon he had built a roaring fire, over which he brewed some mate tea as he stared wordlessly into the flames while the horses snorted and stamped their feet nearby.

Here, in one of the most remote and wild places I had ever been, I got a glimpse into a lifestyle unchanged for centuries. The size of Patagonia and its forbidding topography proves too harsh for much human conquering. Its inaccessibility from the rest of the world creates a place that is rarely found by today’s intrepid travelers: a pureness that has been little changed by man. Rather, it seems, it changes those who visit instead. Immersed here, one quickly understands why Nobel Prize-winning Chilean poet Gabriela Mistral described Patagonia as “beautiful desolation.”

Chile’s Patagonia sits at the bottom of the world: the furthest south that you can go without needing an Antarctic icebreaker.

HORSEBACK RIDING THROUGH THE COLOMBIAN JUNGLE

BUCKET-LIST EXPERIENCES IN THE AMERICAS

﻿Work your way around the world with these bucket-list i...