The African sun set over the vast savannah of Etosha national park, in northern Namibia… giraffe, zebra and wildebeest, silhouetted against the blazing horizon. One more photo stop to capture the staggering beauty of this ancient wilderness, we all agreed, as we drove back on deserted dirt roads towards the park gates.

It was a photo stop too many. We were too late. The gates to a vast wilderness teeming with wild animals, including predatorial lions and scavenging hyenas, were already locked. We sat stranded inside the park, in our dusty, but trusty Land Rover, as dusk settled around us. My seven-year-old daughter Esme peered into the gathering gloom.

“Dad,” she said, “I know there are lions outside, but I really need the bathroom.”

Namibia is a magical, wild and challenging place, of incredible landscapes, vast skies and seemingly endless dirt roads. It’s remote and hard to get to, but it’s also unique and very well worth the effort. Bordering South Africa, Angola and Botswana and with a misty and mysterious coastline overlooked by towering dunes, the Skeleton Coast - which has proved a watery grave to many ships - can sometimes feel like the end of the earth. 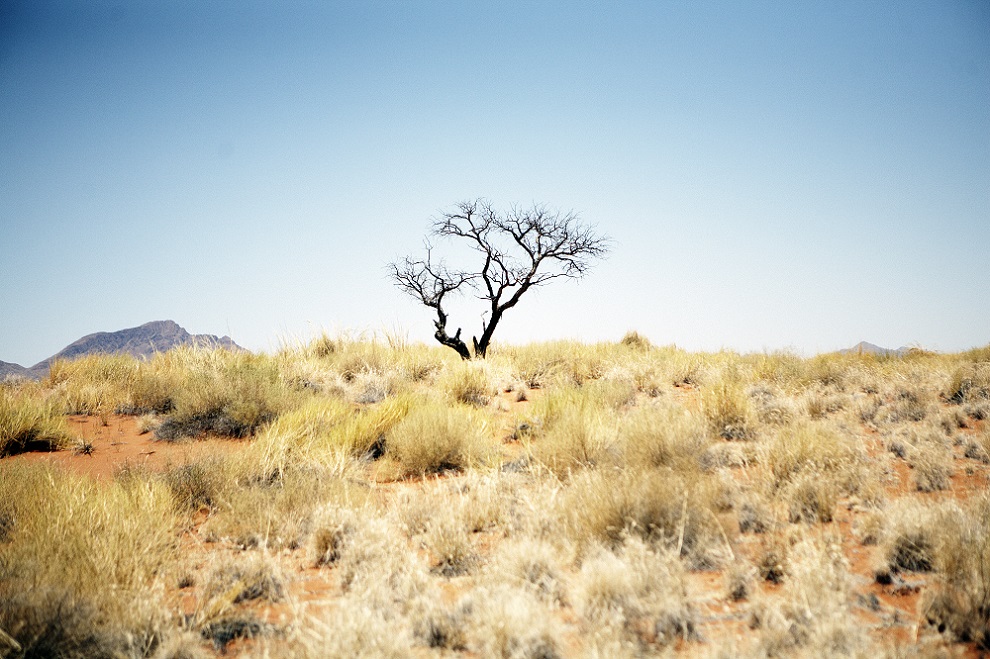 Our 10-day circular road trip covered the capital Windhoek, the southern desert, Swakopmund and the Skeleton Coast, the Brandberg Mountains and the primeval and eerie Etosha Pan. Our guides had created a self-driving tour that combined luxury lodges with long wine lists and spectacular pools, with wild camping and simple and remote hotels.

Driving in Namibia, mainly on dirt roads and in high temperatures, is tiring. Gravel roads with steep pitches and unnerving cambers have to be treated with respect. The first sighting of an overturned 4WD was enough to slow our speeds. A fully charged DVD player proved vital when it came to entertaining the smallest passenger. And back-to-back videos kept cries of ‘are we nearly there yet?’ at bay.

Our first drive, from Windhoek to the Wolwedans Dune Camp, on the edge of the world’s oldest desert, the Namib, took an epic seven hours. We broke the journey at a junction in the middle of nowhere called Solitaire, a shop, garage, motel and bakery, serving up a renowned apple strudel. We sat in the shady garden, sipping iced tea as my daughter, Esme, devoured the sweet pastry.

Wolwedans was, in happier times, a frequent haunt of Brad Pit and Angelina Jolie. It is possibly the most romantic place I have every stayed. Our accommodation was described simply as tents but these were in fact canvas boutique en-suite hotel rooms, ringed by mountains, high on rust red dunes, overlooking a vast savannah.

Before dinner, our guide Ivan took us on a sunset drive into the dunes. He set up a pop-up bar of cold beers and snacks. Meanwhile, Esme exhausted herself, running up and down the sandy slopes and hunting for porcupine quills. 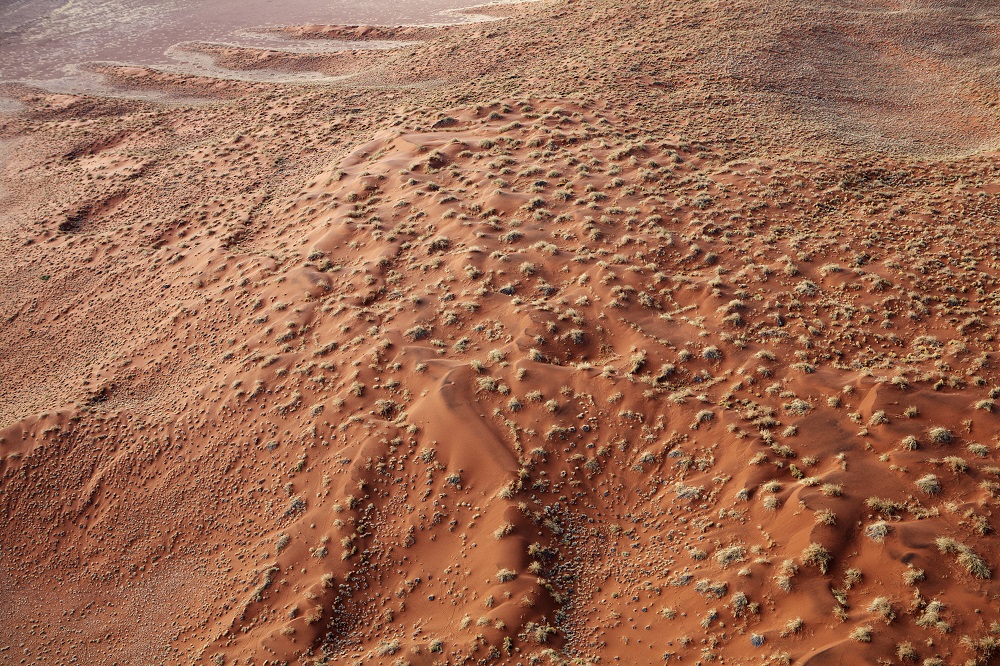 Our three-course, silver service, candlelit dinner, with exhaustive wine list, was served in a nearby tented restaurant, run by students from the Wolwedans cookery school. We finally nodded off to the sound of springboks munching under the stars in the undergrowth near our tents.

Our next stop, Swakopmund, was another long and dusty day’s drive away. This elegant colonial town is sited on the Atlantic coast and remains popular with both Namibian and German tourists, who, more than 120 years after it was founded as a German colony, still have strong connections to the area.

When the swirling fog rolls in and envelops the town, and the sea becomes indistinguishable from the shifting sands, it is particularly atmospheric. Here and there, just offshore, the rusted remains of unsalvaged ships, lost in storms, list mournfully in the waves.

The large swimming pool beckoned at the end of the next day’s sweaty and gruelling drive to the campsite in the Brandberg Mountains, but no sooner had we arrived, than we were out on the road again, in pursuit of desert elephants.

Namibia is the principal home of desert elephants, who have adapted to the conditions by developing longer legs and broader feet to cope with covering long distances in search of water. We bumped down a dusty track until, as we rounded a corner, Esme screeched in delight as the herd came into view.

They stood luxuriating in an impromptu shower, playfully spraying themselves and each other with water from a village waterhole. We watched for a long time, taking in the most entrancing water fight I have ever seen. 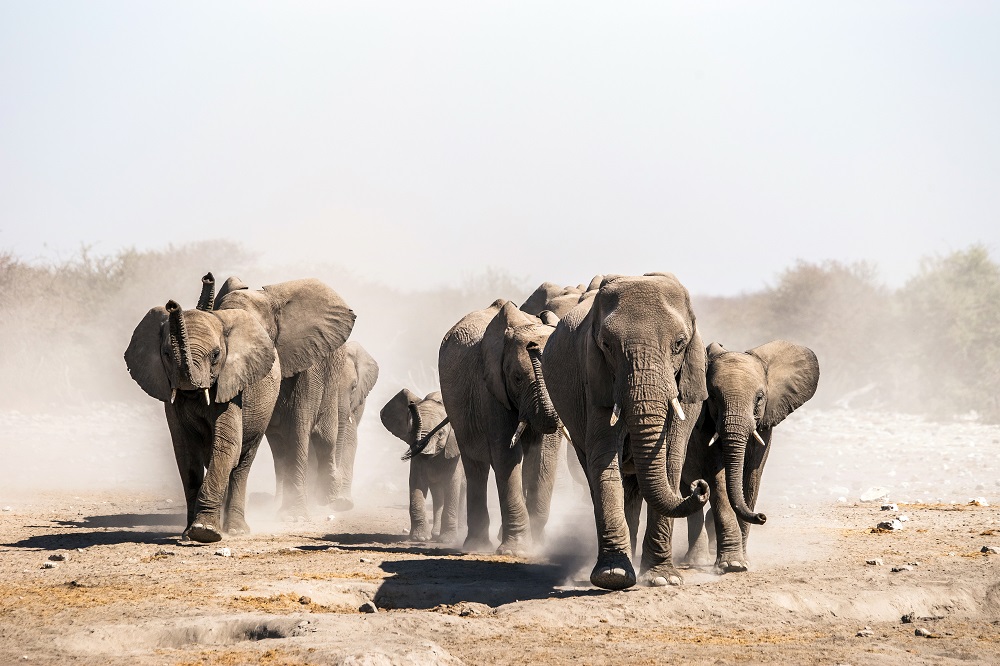 We slept that night in the Land Rover’s rooftop tent, which was comfortable enough, although the eerie noises of the African night, followed by a frequent whispered ‘Dad! Wake Up! Did you hear that…?!’ensured a slow start the next day.

The further north we drove, the more mountainous and forbidding the landscape became. After an overnight stop at the Grootberg Lodge, overlooking the Klip River valley, we woke up to the news that two lions had been in the grounds during the night and had attacked a horse, only a few yards from where we had eaten dinner the previous evening.

Undaunted, we headed on further into the wilderness on rock strewn roads to a remote Himba village. The smiling semi nomadic Himba women, who greeted us, hair plastered with butter and ochre and in elaborate weaves, seemed as fascinated in us, our watches, jewellery and cameras, as we were in them.

Two thousand miles after leaving Windhoek, we finally arrived at Etosha National Park, the ‘great white place of dry water.’ During our two day stay we watched bloodied wild dogs and hyenas scrapping over a kill, a lioness clear a watering hole in seconds as she strolled over for an afternoon drink, and a huge and ancient elephant, ears flapping, eyeball us, as we came face to face on a lonely dirt road.

We also swam in our lodge’s huge pool, drank cocktails on the terrace and — happily — found more than serviceable wifi and phone signals. That was how, in that ancient landscape, modern technology saved me from taking my daughter for a bathroom break in the bushes, under the gaze of drooling lions and hyenas. A quick phone call and five minutes later, the locked gates of Etosha swung open, allowing us to beat a hasty retreat from all those predators.

From abundant wildlife in Etosha National Park to the haunting Skeleton Coast and vibrant red dunes of Sossusvlei, a luxury holiday to Namibia promises plenty of adventure.

Want to take your mini-mes on a mini-break? Swimwear guru Tom & Teddy&...