DISCOVERING THE WHISKY DISTILLERIES OF TASMANIA

by Lightfoot
Leisa Tyler says why you’re sure to find the perfect drop of whisky on this rugged, windswept isle

It’s a nippy spring morning when I join William McHenry from McHenry Distillery, one of a clutch of craft distilleries putting Tasmania on the world whisky map.

Stationed out of two wooden sheds, the distillery has been wowing critics with its big and bold single malts. But first things first: McHenry wants to show me how Tasmania’s wild and woolly terroir is largely responsible for the whisky’s characteristics. Piling into a beaten-up old Toyota Land Cruiser, we take the dirt track winding up behind the distillery, stopping at an old settler’s cottage built by early farmers on the Peninsula, now used by McHenry’s family for candlelight camp outs. The view sweeps across rolling paddocks of khaki green interlaced with patches of dry sclerophyll forest, and beyond, the big blue sea, here uninterrupted until it reaches Antarctica. “Tasmania has the cleanest air and water in the world” McHenry tells me. “And they make the best whisky”.

A former pharmaceutical executive, it was 2008 when McHenry made a tree change from Sydney to Port Arthur, a former penal colony in Tasmania’s southeast corner, to open McHenry Distillery. Tasmania didn’t have a spirit industry to speak of – a colonial era ban had made distilling on the island illegal until 1991 – and the industry was slow to pick up when the ban was lifted. “When we started, it was a paddle upstream to get customers interested.  But craft spirits were going gang busters in America and we knew it was just a matter of time before Australians cottoned on”, says McHenry, who doesn’t drink, but jokes that with a name like his, didn’t have a choice than to start a whisky distillery.

Cotton on they did. Although charging eye watering prices, substantially higher than premium Scottish or Japanese single malts (a 500ml bottle of McHenry’s four-year-old whisky, for example, retails for USD$200), they still sell out. The tempestuous and artisanal nature of Tasmania’s clean terroir is no doubt one selling point (the island’s truffles, wine, wasabi and beef all command, and get, top prices). But the money spent is worth it as the island also features brands such as Sullivan’s Cove (the first distillery to be awarded the best single malt at the World Whiskies Awards outside of Scotland). 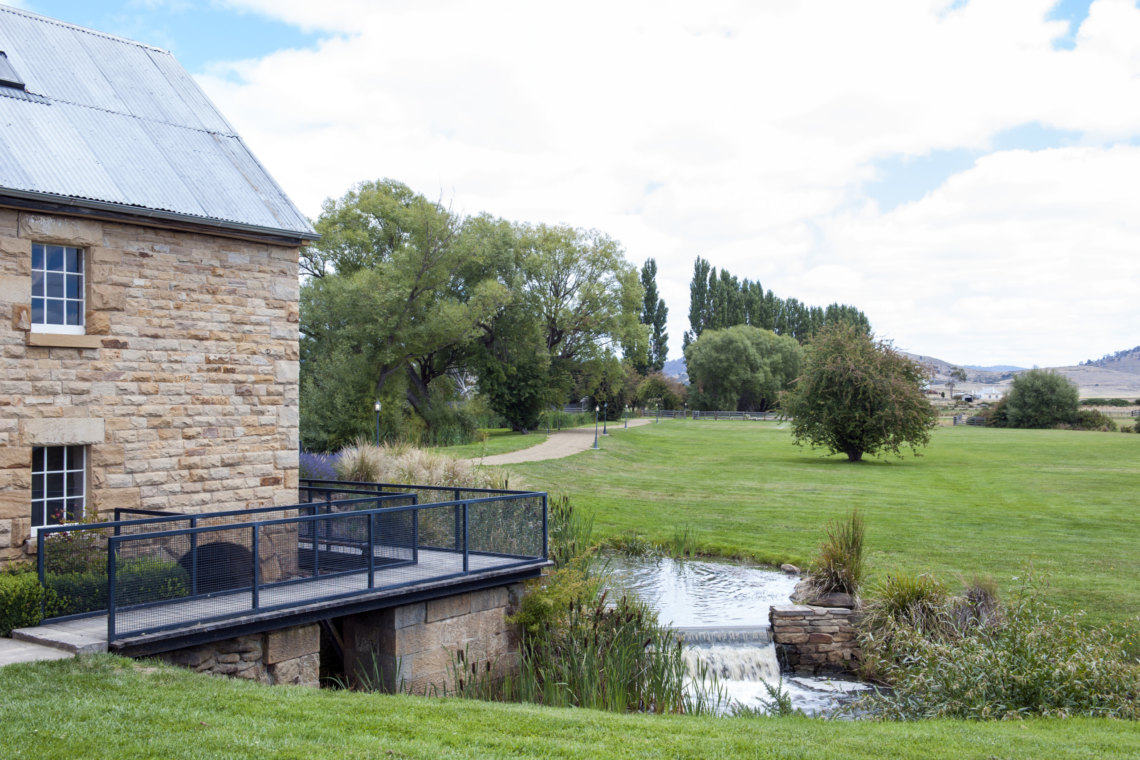 In front of a roaring fire back at McHenry’s tasting room, we try a small nip of the current single malt, which is young but complex with what I identify as bush berries on the nose. “Tasmania is about producing high quality, hand crafted and artisanal products with flavours ingrained in the island’s landscape and history”, says McHenry, who also makes a range of gins, including Federation that is “inspired by the bounty of antipodean flora”.

Remote, windswept, fertile and pounded by Roaring Forties (winds that originate in South America and travel 17,000 km before bombarding Tasmania’s western coastline), the island state was captured by the British in 1803, who made it a penal colony for their most hardened of convicts. Twenty years later lawlessness was rampant. The women to men ratio sat at 1:10, there was one bar for every 14 people and 64 per cent of the population were ex-convicts. In 1838, Governor John Franklin, under directives from his judicious wife, the explorer Lady Jane Franklin, banned the distillation of spirits and hard liquor. “I’d prefer barley be fed to pigs than it be used to turn men into swine”, Lady Franklin reportedly said at the time.

While Tasmania’s demographics grew more urbane over the next 150 years, laws against distilling spirits did not – until 1991, when whisky buff Bill Lark petitioned the government to have them overturned.

Lark had been fly-fishing with his father-in-law in the Central Highland’s Great Lakes, a series of trout stocked lakes in the island’s mountainous centre, when the idea of distilling whisky dawned upon the pair. With the cleanest air and softest and purest water, Tasmania also has a perfect climate for growing barley and an abundance of highland wetlands with carbon rich peat.

A year later, with a change of law and the aid of an old copper distiller that Lark’s wife found at a weekend garage sale, Tasmania’s whisky industry was up and away. 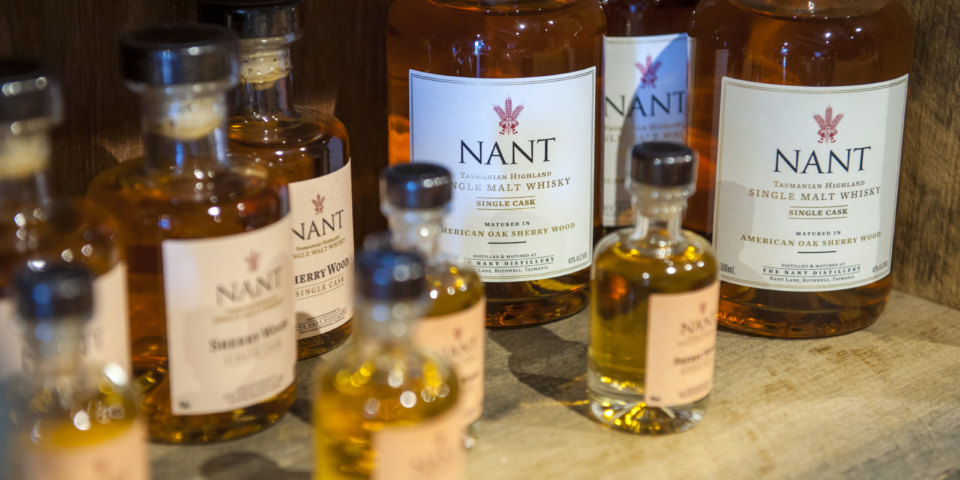 The next day I head to the Lark Cellar Door & Whisky Bar located in the Coal River Valley, just outside of Hobart. Guided by distiller Rob Tyson, we are walked through the process of making whisky, from crushing barley to fermentation, barrelling and ageing and tasting. The Lark Single Malt is peated from the family’s own peat bog and aged in 100 litre former sherry and port casks, which have a larger surface area to volume and allow for faster aging. Tyson lets us try whiskies at all stages of the aging process. The youngest - pulled straight from their barrels - scream with alcohol and are too intense to drink. But they are a good prelude, I discover, to trying the ready for bottling whisky, which is developed and more mature, with lots of Christmas spice and notes of dried fruit.

The next day I hit the road again, driving up the Midland’s Highway, past small villages that once served as carriage stops between the north and south of the island, to the highland village of Bothwell. Settled by a handful of Scottish families in 1830, it is named after an equally small town back in the motherland. While golf and an impressive array of heritage listed buildings built using locally quarried sandstone was traditionally the main draw for tourists to off the beaten path Bothwell, these days it is the Nant Distillery.

It is a stunning location; sheep shearing sheds, old farmhouses with wrap around verandas and a mountain stream cluster around the 1823-built mill that now serves as distillery, tasting room and wood panelled restaurant. Recently changing hands, like many of Tasmania’s 15 craft whisky distilleries, Nant is in expansion mode: Upping the amp from eight 100 litre barrels a week to 14. While that may sound ambitious, it is a mere tipple for Scottish standards. The Glenlivet, for example, produce around 113,000 litres per week.

Nant produce several single malts, including ones aged in sherry casks, port casks and, available during my visit, local pinot noir wine casks. I try them all in the rustic tasting rooms. Each has picked up characteristics of its aging cask. The port has sweet, fortified wine notes. The sherry is more astringent. It is the whisky aged in pinot noir that wins my heart; robust and earthy – just like the landscape surrounding.

From climbing jagged mountain peaks, to exploring wild coastlines, to diving into history, there’s plenty to do in Tasmania with Lightfoot Travel. 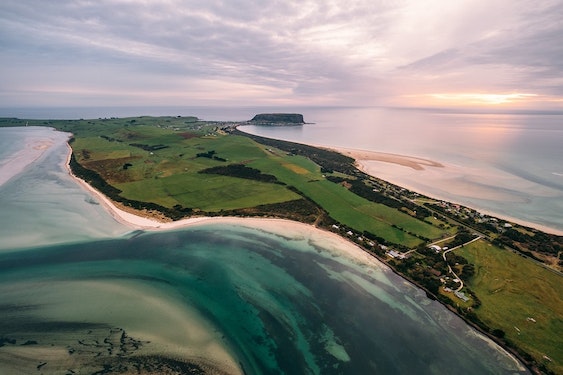 A CHEF ON TOUR IN TASMANIA