The bubbling liquid spat and hissed as it trickled over the yellow crystals, which formed an alien-like crust around the edge of the pool. Our guide told us that this spring wasn’t there a week ago, and was proof that Dallol is constantly changing and extremely unstable. However, we had chosen this inferno of burning salt, sulphuric acid, lava and volcanic rock as the destination for our latest charity fund-raising expedition. The Women On A Mission team had planned to make a six-day mountain bike ride across Ethiopia’s Danakil Desert to raise funds for female survivors of war. No one had attempted it before and it wasn’t hard to see why.

Located in the Afar region in the northeast of Ethiopia, the Danakil Depression sit on the East African Rift System. Here the Earth’s internal forces are currently tearing apart three continental plates and the area is often disturbed by earthquakes and volcanic eruptions. As recently as 1926, a phreatic eruption (magma mixed with water) created the nearby Dallol Volcano. This, blended with daytime temperatures of over 50°C, helps make it officially the hottest inhabited place on Earth.

The main mode of transport in Dallol is camel. We were now about to make the 200-kilometre ride across this rocky, bone-drying land by bicycle.

We had started our journey by driving by Jeep from Mek’ele, which is set at 2,000 metres, to Hamed Ela, which is set just 150 metres above sea level. It was a real shock to the system. We thought we were prepared. We had support crew of two cooks, five drivers, three guides and two armed guards and enough food and water to last the week. But even though the 10-women team was spread across Singapore and the Middle East, we still weren’t prepared for the heat.

The breezy temperatures that we had experienced in lofty Mek’ele had been replaced by a sweltering 38°C. Whilst we lay immobile in our wooden camp beds we were still dripping with sweat.

However, even a restless night’s sleep couldn’t quash our enthusiasm for climbing on to our saddles and making the 23-kilometre ride to Dallol. The ride across the salt plains was magnificent and when the team arrived at Dallol at 11 am we were in high spirits. But when we started hiking across the Martian hot spring landscape we realised that the temperature had already risen to a blistering 45°C. However, after coming all this way, we wanted to see more and decided to hike to the nearby salt canyons, whose much sought-after contents are the reason why people still choose to live in makeshift villages around the area.

The reddish pillars of salt that shoot 60 metres into the sky are a sight to behold, but as the thermometer now read 50°C, we chose to cycle back to Hamed Ela.

It was then that we realised we had made a grave mistake by underestimating the effect that such extreme heat would have on our bodies. When we stopped by a salt lake later that afternoon to see where miners carve out slabs of salt to sell, 70 per cent of our team started to show signs of heatstroke. People had pounding headaches, felt nauseous and then one teammate fainted. Heatstroke is a fatal as hyperthermia, so with the closest hospital five hours’ away, the women who felt well took it in turns to check on the sick, put cold compresses on them and make sure they were hydrating properly.

We immediately decided to change our schedule so that we would depart earlier and not bike in the heat of the midday sun. The next three days went far more smoothly. We were on the road by 6 am each day and had covered our targeted distances by noon. In the afternoon we would try and seek shade. The ride was more enjoyable than the ‘relaxation’ time. As the air was stifling, our drinking water was tepid and there was nothing to do, but just wait until the sun went down. Our guide would try and distract us with stories about Ethiopia. And regale us with tales of how courtship is conducted in some areas of the country. “A man throws a lemon at the feet of the woman he wishes to date hoping she acknowledges him by picking it up,” he said. Ethiopia is a very rich and colourful nation. The Afar people are Muslim, but the rest of the country is Christian. Ethiopia is said to be the second oldest Christian nation in the world after Armenia and remains the only country in Africa that has never been colonised.

While the landscape may be changing, we found that the locals want life to stay the same. When we visited the village of Waideddo, the local Afar chief talked about their life and customs. “We don’t need our children to go away and get an education. We are very happy here the way we are and do not want to change,” he said.

On the fourth day of our trip, we rode to Erta Ale, known locally as the ‘smoking mountain’. The 600-metre-high volcano is one of the few active volcanos in the world, and it’s even more unique as it comes with a lava lake and sometimes two. As we laboured uphill on our bikes, the occasional convoy of tourists (mostly French scientists and photographers) would cheer us on by shouting encouragements: “Le Tour du Danakil! Bravo ladies!”

However, the ride was worth it. For when we made the final steps by foot, we were rewarded with the most spectacular sight. As we looked over the rim of the volcano, we felt completely transfixed and overwhelmed by nature’s raw power and might.

When we came to the end of our ride, we were in no doubt that this was one of our most gruelling expeditions to date. We had made the first-ever crossing of the Danakil Depression of Ethiopia on bicycles. Two hundred kilometres of sand, bush, lava and volcanic rock lay behind us. It was an arduous expedition, but we persevered, and every day we pushed on, finding resources we did not know we had. Every step of the way, we knew that we needed to do it to support women who had been so much braver than us. 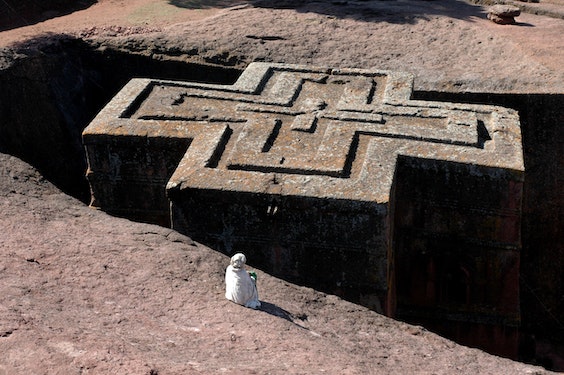 5 COOL THINGS TO DO IN ETHIOPIA
Read more

FOLLOWING A CAMEL CARAVAN IN ETHIOPIA