by Lightfoot
John Borthwick kayaks, treks and ziplines through the Costa Rican jungle

Now you see it, now you don’t. There’s an almost invisible lizard sitting motionless on a leaf in this Costa Rican jungle. With the identical colour and textures of its surroundings it looks perfectly like a leaf, nothing like a lizard and certainly bears zero resemblance to its most unlikely nickname. Meet the Jesus Christ Lizard.

How my guide spotted the green basilisk lizard — that’s the “JC’s” official name — from 20 metres away is another of the jungle’s mysteries. Despite its superb camouflage, the 15cm, leaf-mimicking creature stands out in another sense because of a particular skill it has: once in motion, the JC Lizard moves so lightly, especially across water, that it appears to “walk”, Christ-like, on water — thus its miracle moniker.

Howler monkeys swing through the forest

The lizard that I spotted (okay — it was spotted for me) in Tortuguero National Park is just one performer in the grand Cirque du Genesis that howls, growls, crawls and scampers through the jungle canopies and cloud forests of Costa Rica. With almost a quarter of its 51,000 sq km area being nature reserves, national parks or wildlife refuges, this compact Central American country has neatly positioned itself in our age of eco-tourism as a kind of Jurassic Redemption Park. 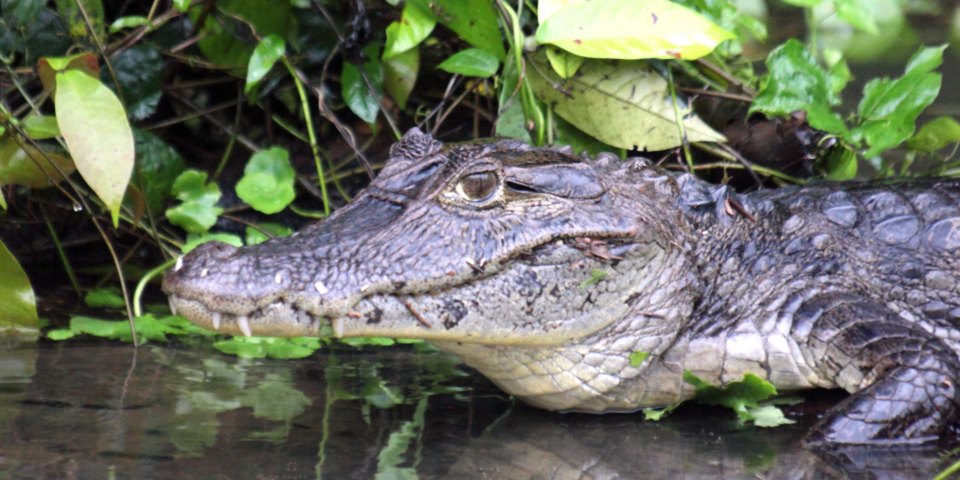 Nowhere is this Eco-Eden status more evident than around the inland town of Santa Elena and its celebrated, 5,000-ha Monteverde (“Green Mountain”) Cloud Forest Reserve. Pacifist Quakers who migrated here from the US in the early 1950s, gained legislated protection for this unique forest domain that remains home to quetzals, bellbirds and thousands of other species.

High on its misty, 1440-metre ridge, I strain my eyes for the 20 kinds of hummingbirds or other varieties of teeming things that our guide, Alex declares live in, under and over the Monteverdean canopy. He seems to spy them effortlessly, with a “See, over there, a black-faced solitaire thrush.” Or, “Look, an aguti – a kind of guinea pig.”

The forest menagerie consists of 850 species of birds, 600 butterflies, 1,200 orchids and 237 mammals, but I can barely see the species for the trees. Should I suspect that Alex sneaks into the jungle at dawn to glue in place stuffed versions of these exotic creatures, which later he effortlessly points out to us squinting visitors? No. As I become accustomed to the jungle’s nuances, even I spot the endangered superstar of Central America’s aviary, the rare quetzal bird. The elegant, turquoise creature is perched high in the dappled canopy, regally trailing its lengthy tail feathers like a monarch’s gown.

Critters galore flit and dash beneath the forest’s primal topiary. Some, including ocelot and tapir are so elusive — or simply smart — that they steer well clear of our inquisitive, digitally obsessed presence. Having seen the prized quetzal, towards the end of our forest hike I encounter almost its opposite — a score of tiny, iridescent hummingbirds. These brilliant, hyperactive violet sabre-wings hover in a coloured cloud beside a feed trough, with their wings blurring at 60 to 80 beats per second.

Monteverde straddles a ridge in the middle of this isthmus country. I can see the Pacific Ocean shimmering far to the west while to the east the Caribbean remains just out of sight. Before I head to the coasts, though, it’s zip-line time. In a private reserve near Santa Elena, a cable car hauls us up the mountain to a high platform that boasts a perfect view of the Fuji-like, volcanic cone of Mt Arenal. But we’re not here for the sights.

A young Tico (the nickname for a Costa Rican) guide hooks me onto a rolling shackle that’s attached to a metal cable stretching over the jungle. One shove and we’re off! Gravity does the rest as we soar in tandem 130 metres across a sea of treetops until we reach a landing platform. We cross to another lofty platform and do it again, rocketing out of the canopy to swoop across a second valley. It’s like being Batman for an hour, with a quetzal’s-eye view of the forest below. In nine tandem and single “flights” I zig and zag down 1300 metres of zip-lines until landing, abuzz, back at the cable car base station. 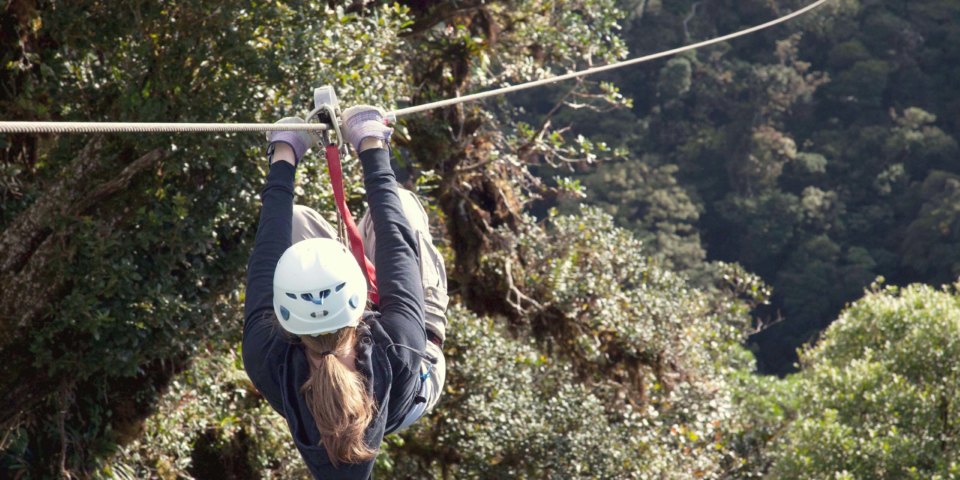 I head east through Braulio Carillo National Park, where many scenes of the movie Jurassic Park were shot. “Enjoy your Costa Rican massage,” calls the driver as we hit the unsealed, corrugated rural roads. Eventually we transfer to a longboat and begin gliding through jungle channels walled by vertical greenery. The three-hour journey is hypnotic and almost too soon we arrive at the little Caribbean town of Tortuguero.

“Tortuguero is the maximum expression of life on Planet Earth,” declares our new guide, Sebastian, deploying a generous dose of Latino hyperbole. Tortuguero National Park is a Central American Amazon, with 31,000 hectares of dense rainforest (plus plenty of namesake rain), as well as a major sea turtle hatchery and endless kilometres of jungle canals. Each day we prowl these backwaters by canoe or with a silenced outboard, spotting three-toed sloths, iguana, herons and beady-eyed caimans, not to mention the extraordinary Jesus Christ Lizard.

After a few days deep green immersion I head back west, over Costa Rica’s cordillera spine with its 200 volcanic vertebrae, 11 of which are still active. Small towns dot the country’s Pacific coast, each offering specialty adventures like scuba diving, surfing or game fishing. The best known is the central coast town of Quepos, from where I spend an afternoon at the beach, bodysurfing and then exploring nearby Manuel Antonio National Park. 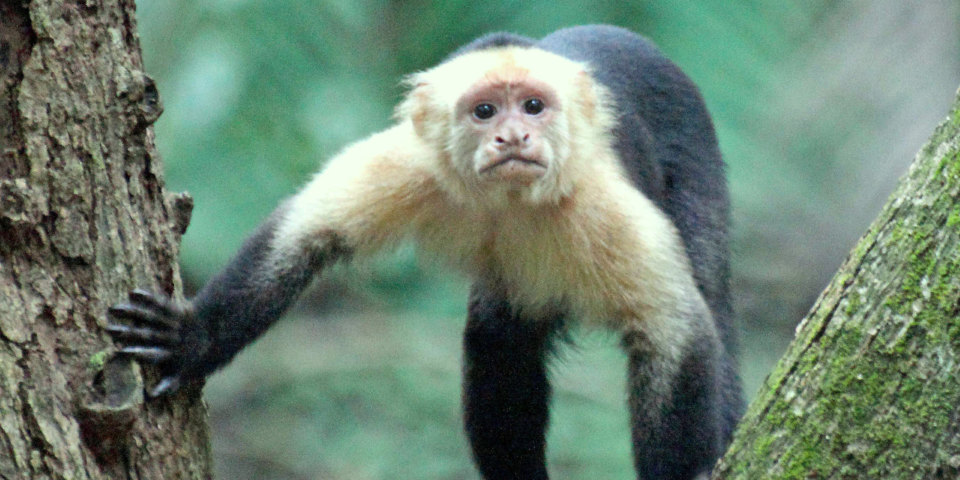 It’s a simian city in here. Howler monkeys swing through the forest, more heard than seen, with their booming call rattling the jungle like Tarzan’s holler. Equally elusive is the endangered, long-limbed spider monkey, but I see one lounging on a tree limb like an indolent rock star. Meanwhile, white-faced capuchins pop up everywhere, including one that I see devouring an unfortunate frog. “I always thought they were vegetarians,” exclaims the local man watching beside me. On another tree a three-toed sloth is moving at glacial speed while the tiny squirrel monkeys move like quicksilver.

Great chunks of the country, from Tortuguero and Monteverde to others pristine reserves like Drake Bay and Curu, could be touted as Noah’s Park or Jurassic Ark. Perhaps my guide Sebastian didn’t exaggerate: step into a Costa Rican jungle and you are, indeed, surrounded by a maximum expression of life on our blue-green planet.