by Lightfoot
The TV adventurer Ed Stafford is famed for being dropped into the wilds of Borneo, Africa and the Amazon, and then left to fend for himself. Not every day in the jungle has resulted in a culinary feast. In fact, those of you who have watched his show Marooned on the Discovery Channel will know that some of the things he has had to eat are pretty dreadful. So in the spirit of our Food Special, we asked the record-breaking adventurer what are the worst things that he has ever eaten….
1.
SKUNK in Arizona, USA

Why: I was trying to survive in the desert for the Discovery Channel and was trying to trap a rabbit. Something was moving a rock that covered my fresh water at night so I decided to make a deadfall trap to catch it – it wasn’t a bunny rabbit! Taste: I went through the stinky gland sack when skinning it and contaminated the meat. So not the best if I’m honest. Eat again? No

2.
ELECTRIC EEL in the Brazilian Amazon

Why: If you use a gill net to fish you can’t be too fussy about what you catch. One damp morning in the Amazon, I waded into the dark waters to retrieve my catch of fish. One fish looked longer than the rest and when I grabbed it sent me an electric shock up my arm and through my chest. Taste: Rubbery and chewy sadly. Probably the worse tasting fish in the river! Eat again? Yes, but only in emergencies 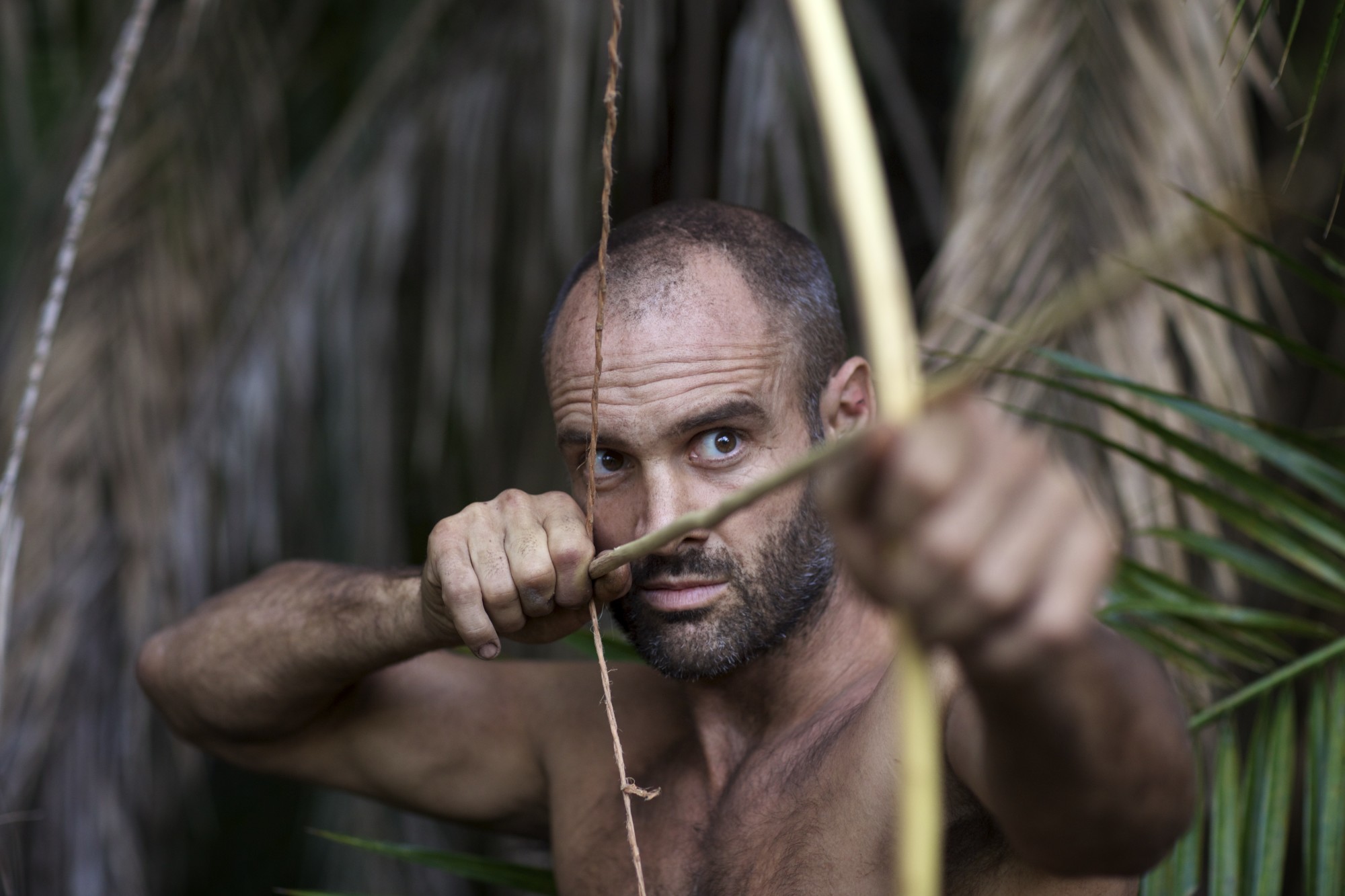 Hunting with a bow and arrow. Photography by Discovery Communications/Heinrich Van Den Berg

3.
RAT ON A STICK in various places including the Gobi Desert

Why: Rats are abundant in most places in the world and simple deadfall traps work well to trap them. I was trying to survive in the Gobi desert with no tools or equipment and I noticed that there was evidence of small rodents so I set some traps – basically large flat rocks balanced over some bait. Taste: The majority of a rat tastes nice – honestly, it’s fine. Just like carbonised meat! But there is always one slightly tangy bit that makes me screw my face up – the intestines. Eat again? I suspect so yes – it’s a survival staple.

Why: I was trying to survive in Northern Patagonia and was eyeing up my fishing possibilities when I noticed a cluster of young tadpoles. Protein was the word that went through my head so I scooped out 30 or so and toasted them by the fire on a deer scapula. Taste: Revolting. Essentially tadpoles are just intestines so it tasted like… sh*t. Eat again? You’d have to pay me a lot.

Why: I arrived walking out of the jungle to a tiny village carved out of the trees. We asked if we could stay and the owner of the house offered us what he called “puma”. It had been killing the village chickens and so they had shot it. Waste not want not – I thought.

Taste: It was gamey (slightly putrid as it had been hanging for weeks) and it kept me up all night groaning with sharp stomach pains. The man showed me the skin in the morning. It’s wasn’t puma – it was an ocelot.

Eat again? I don’t recommend eating any cat but if I had to – I’d want a fresh one

And to help us get our appetites back – what’s the best thing you’ve ever eaten?

Where: The uninhabited island of Olorua

Why: The best thing I’ve ever eaten is slow cooked goat leg that I cooked in an underground oven on the uninhabited island of Olorua.

Taste: It was so tender I could have bitten through the soft meat with no teeth!

Huge and hugely varied, visitors to the United States have a lot of options to consider.